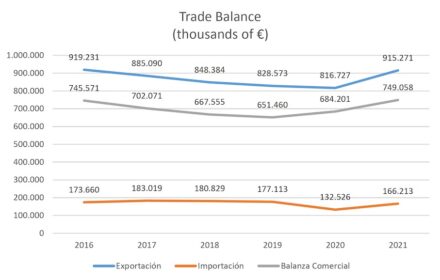 After years of decline, with a total value of €915 million they came close to the 2016 figure (€919 million) for the first time again

Spain’s natural stone sector has coped well with the Covid-19 pandemic, as have the other major exporting countries worldwide. In 2021, it reached +12.07% in exports compared to the previous year. The increase over 2020, the last normal year before Corona [Covid19], was +10.46%.

Moreover, Spain’s natural stone exports had been in a continuous decline since 2016, which was only stopped in 2021. In words: of all things, when the pandemic made business considerably more difficult, the Spaniards’ exports, valued at around €915 million, almost returned to 2016’s figure of €919 million.

The following table shows the details: 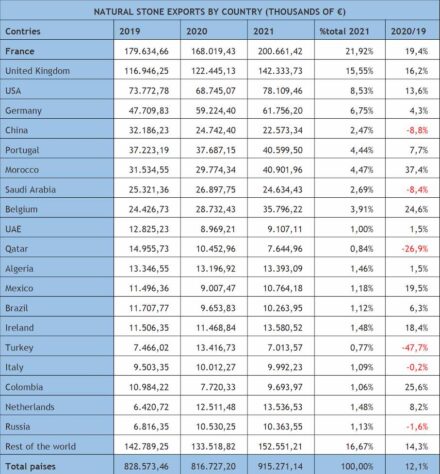 Two things should be noted:

On the positive side, the share of semi-finished and finished products in total exports increased (+25.24%, to €658 million). Significantly lower in the total increase was the growth in the export of blocks (+5.92%, to 256 million €).

The provinces in Spain with the highest shares of natural stone exports are shown in the following table. Alicante made a significant leap forward: 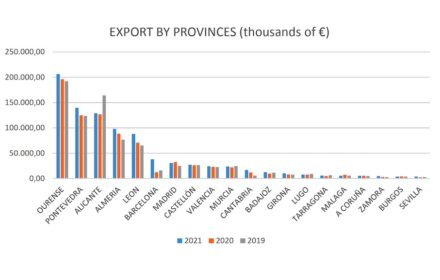 There was an increase of imports by +25.76% in 2021 compared to the previous year. Especially the development of raw material (blocks) was significant (+36.23%). Apparently, despite increased transportation costs, some companies have adopted the business model of buying blocks abroad, processing them (and reselling them?). Imports came mainly from Portugal, China, and India.

The figures were provided by Javier Fernández Cortés, Secretary General of Cluster Piedra, the service center for the stone industry of all Spain. It was founded to take care of the marketing of the local varieties and to help the companies on their way into the future through training and service.