Peter’s Corner: at the 56th Marmomac in September 2022, it finally became apparent what the Veronafiere actually wants with its new brand “Plus“ or “+“ and the ringing of words like “Be the Plus“ 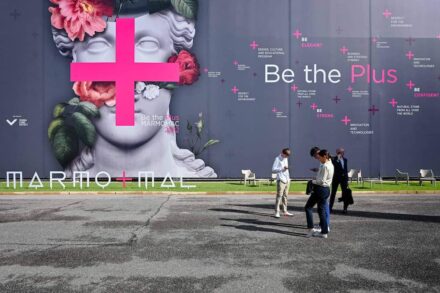 “Plus“ or “+“ is the new buzzword of Marmomac. And indeed, at this year’s 56th edition of the show (September 27-30, 2022), there was added value for exhibitors and visitors: in Hall 10, the former “Italian Stone Theatre“ (now “Plus Theatre“) had recognizable thematic focuses, namely, first, product design; second, CNC experiments; and third, economical use of materials. They were scattered throughout the presentations Brand&Stone, Visionary Stone, Etica Litica and Marmomac Meets Academies, unfortunately recognizable as such only at second glance.

We will bring the detailed descriptions about them later.

A plus in the truest sense: the lectures, this time especially those on the topic of sustainability. Until now, Marmomac had completely neglected this important topic. Now it was featured in lectures not only in the Plus Theatre in Hall 10, but also in Hall 6 in a series of events organized by the Verona Stone District where a group of companies from the region got together independently of the fair for the purpose of marketing.

Unfortunately, there was something to complain about in the staging of the Plus Theatre: the deafening acoustic bomb blasts, with which the organizer filled the hall at the end of each presentation, chasing the audience away in the truest sense of the word.

A few more words about the Plus with which Marmomac has been broadening its field of business for some years now: it began in 2016 when, for its 51st edition, the trade fair deleted the second -c in its name (formerly: Marmomacc) and abruptly came out with the new designation “Marmo+Mac“ without further explanation.

To clarify, the show is still called Marmomac, according to its press releases, and Marmo+Mac is just the name for a couple of new or rebranded services.

One is the “Plus Theatre“ already mentioned above. Another is the platform “M +“, which is an online extension to the real fair. Many trade fairs have now set up such virtual meeting places throughout the year, such as the Xiamen Stone Fair with its “Cloud“.

Vinitaly, the very successful Veronafiere wine fair, has also adopted a “Vinitaly Plus“. In both cases, the idea is to expand the business field of the fair to include presentations of companies and products on the Internet portal.

It will be interesting to see what the Veronafiere will use to attract enough visitors to such sites.

One way is already apparent, and it is annoying – the show is trying to force its exhibitors and visitors into the new + Community. Anyone looking for the exhibitor directory this year had to be very patient before finding it on M + in the navigation on the far left under a tab with the cryptic designation “Brand rooms“.

We allow ourselves to be know-it-alls: The exhibitor directory belongs on the home page of a show, and there under the “Visitors“ tab, as most shows around the world do, or under “Exhibitors”, or better yet, under both.

This year’s Marmomac, however, to put it correctly, had no exhibitor list at all. Rather, “Brandroom“ lists not only the exhibitors, but all the companies that signed up to be part of the community.

“Be the Plus“ is the marketing buzzword for that.