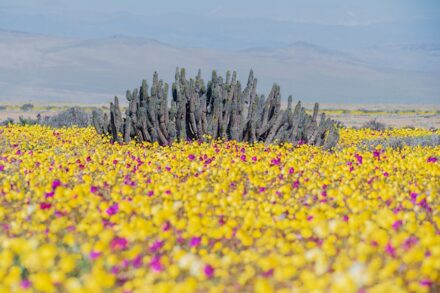 “El Desierto Florido“ (The blossoming Desert) is a phenomenon in Chile’s Atacama when it has rained there. During October 2022, the driest place on Earth was in color again. It stretches for approximately 1,600 km along the western coast of the South Americas (1, 2).

The Brazilian trade journal Rochas de Qualidade will cease publication at the end of 2022. It was founded by Emanuel Mateus de Castro and played an important role for the natural stone branch for over 55 years (1, 2).

Lusso Stone is a British company for luxury bathroom fittings to be used together with its natural stone bathtubs and sinks.

The World’s Largest Limestone Quarry is the one at Rogers City, Michigan, with 4 miles in length and 1.5 miles in width, according to the World Record Academy.

Seven marble reliefs from the reign of Assyrian king Sennacherib have been unearthed in the ancient city of Nineveh in northern Iraq.

In fossil leaves, puzzling structures are often visible under the microscope. Researchers have now been able to show for the first time that they originate from calcium oxalate crystals.

Graphene can be used to extract traces of gold from waste, scientists report. Grahene is a variant of Carbon.

Being the highest region on Earth, the Tibetan Plateau engenders the most intriguing myths of Earth system science, provides the most water resources for human survival, and creates the most uncertain legacy for future generations. In the future, the Third Pole Environment (TPE), a sponsored flagship program under the auspices of UNESCO, UNEP, SCOPE, and CAS, will investigate the region’s extreme environment.

In India’s state of Madhya Pradesh, tourists can enjoy a boat ride to the Marble Rocks and the Dhuandhar falls of Jabalpur.

Video of the month: Greekreporter webpage tells the story of unfinished statues on the island of Naxos. They are more than 2000 years old, made of tons of the famous marble.