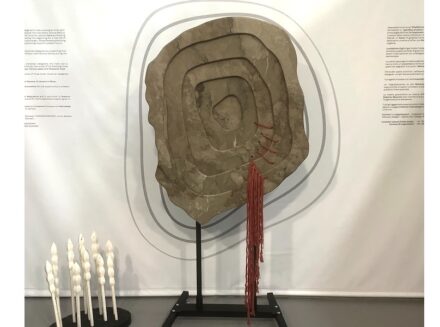 For the fair, they had made art objects and objects for everyday use, respectively

“If there is just a little light somewhere, life will go on somehow.“ Vadym Livshyts quotes a saying from the Talmud as we chat at the booth at Marmomac 2022 about the works of Ukrainian designers on display there. He is the junior director of the natural stone company Instech, which has a subsidiary called Llab.design for the creative use of stone, and it was from one company that the idea for the “Ukrainian Vitality“ presentation came, and the other that put it into practice. There was support from Marmomac and from a long list of sponsors.

All the works, how could it be otherwise, dealt with the current situation in Ukraine. The objects are explicitly meant as an advertisement for their own cause, which is not only the cause of Ukraine but of the whole democratic world.

There were artistic works, but also product design. Not in every case, the viewer will immediately recognize the political message.

For example, “Identity“ by Alice Lysykh (see photo above). The artist showed abstractly a kind of fingerprint, which can also represent the territory of a country. The lines drawn in a circle symbolize the cohesion of the regions; the interwoven threads make it clear that all parts of the country belong to the nation. 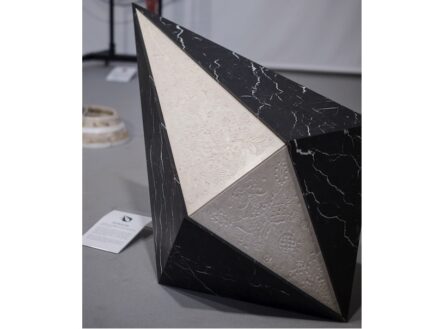 The work of Marianna Yeleyko and Rosolana Dudka was also about national identity, here treated using the example of the sunflower. “Seed“ is the title of the work: it reproduces the botanical form of the sunflower’s seed, artistically extended by a strip of light stone. In the strip are engraved representations of the flower – the petals, typically arranged in a circle, stand for the citizens of Ukraine and the unity of the country. Natural stone remnants from foreign countries were used, as, by the way, in all works. 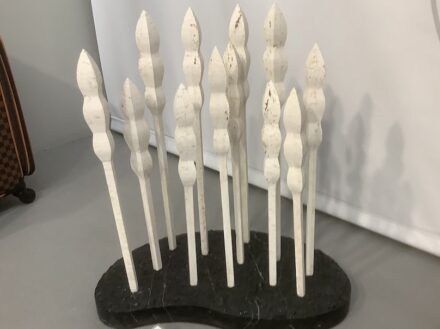 The work “Grano“ (Grain) is also devoted to the seeds of the sunflower as one of the main agricultural products of Ukraine. Here it is a sculpture showing rising grains on stalks. Artists were Oleksandr Kysil and Anna Manako.

These three works came from a competition that had been announced about 2.5 months before Marmomac. There had been about 15 submissions, and the 3 aforementioned were selected and produced by the company Llab.design.

For the presentation at Marmomac were added 3 other creations from the field of product design. 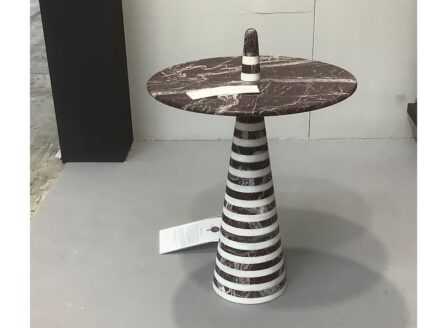 “Tempo“ was the name that Valeria Vari had given to her side table. The message here is in the details: the base has 30 marble discs – this recalls the 30 years that Ukraine was allowed to spend in independence since the end of the Soviet Union in 1991 until the invasion by the army of Russian President Putin. The whole object could also be a sundial, showing the course of the sunny hours. 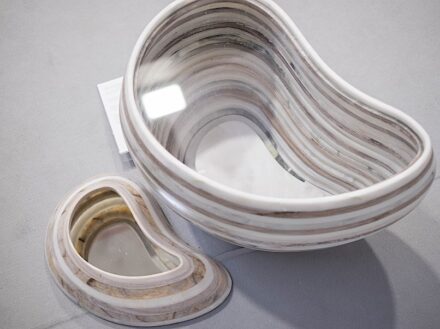 “Birth“ is a coffee table designed by Anna Manako. The top is made of glass and allows you to look deep inside. In addition, there is a smaller unit, which is based on the shape of a female uterus – if you look inside, you can see yourself in the mirror. 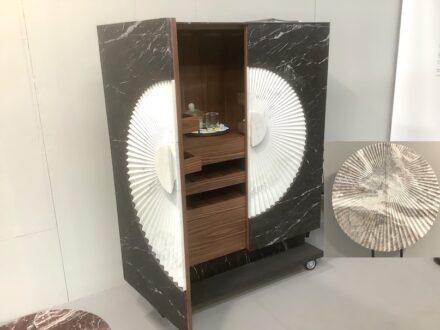 “Star“ by Alina Kravchuk is a thin marble slab with rays on the surface. It is used, for example, as a decorative element for the front and handle of a bar or chest of drawers.

Llab.design also has a company headquarters in Switzerland. The company is looking for distributors in the West. 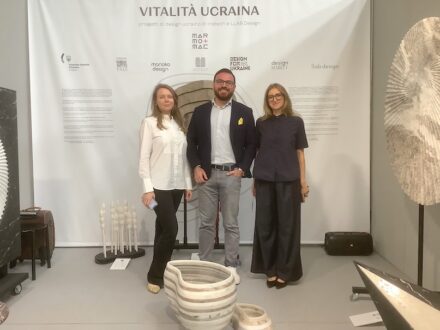