Premios Macael: Spain’s King and Queen paid recognition to the stone sector in the province of Almeria 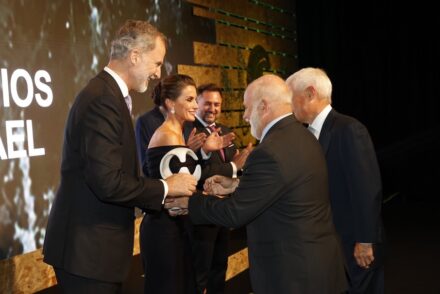 Don Felipe and Doña Letizia presented the awards at the Premios Macael gala / 20 years ago, TV journalist Letizia Ortiz was herself the presenter at the event

The Spanish state paid high recognition to the stone sector in the province of Almeria, and at the same time, a little fairy tale story ran through the gala for the presentation of the awards of the Marble Macael (Premios Macael): King Felipe VI (54) and Queen Letizia (50), in the Spanish: Don Felipe and Doña Letizia, were present at the festive event and presented the prizes to the 10 winners. This was the 35th time the prize had been awarded, and now the king himself came by, and that wasn’t all: Letizia herself had been the presenter at the event exactly in November 20 years earlier, then still under the name Letizia Ortiz and in her role as a journalist for a TV channel.

In front of the building in the town of Macael, the center of extraction of the white marble of the same name, citizens cheered, and all sorts of celebrities arrived with the royal couple, ranging from state ministers to local politicians. The number of guests was almost 650 (it had been 450 in 2021), as reported by the Association of Marble Companies in the Province of Almeria (AEMA) on its web page. The association is the organizer of the annual event, which promotes the beauty of the local marble and the sector’s performance.

Thus, in his speech, the King praised the skills of the marble people of Macael and the surrounding region and the value of their work. He and the Queen had come to “convey our sincere congratulations“ to the sector.

According to the press release of the Court, he also mentioned the newly created category at the Premios Macael, “Sustainability“ in production, and pointed out that according to the organizers, the gala itself was organized in a climate-neutral way.

Jesús Posadas, head of the AEMA association, was happy that the highest representatives of the state had finally found their way to Macael and took the opportunity to fight for more support for his sector on a grand stage. He renewed his demand that the marble industry would get recognition of strategic importance and urged the speedy completion of the marble highway from Caniles to Fines or the high-speed train to the region.

We will present the award-winning projects in a separate article.

Last but not least “For the evening, the Queen had opted for a midnight blue dress, a color she had also chosen for her last public appearances,“ as said on the webpage of the daily La Vanguardia, where a video of the award ceremony can be found.

Webpage of the Royal House (Spanish)