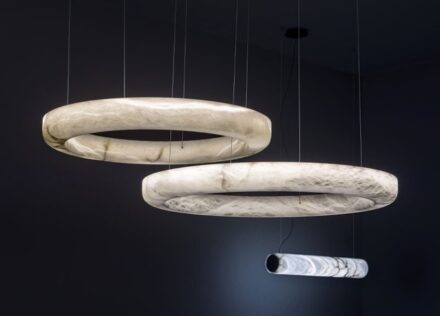 “Halo“ is the name of a new pendant lamp by Spanish United Alabaster company. It consists of two overlapping rings suspended from a single ceiling base. With the rings fully illuminated the details of the translucent stone get visible.

Foster + Partners architects will use slate from Spanish Pizarras group for the façade restoration of the Whiteley Shopping Center in Bayswater, London. The company’s Cupaclad installation system will be used for the building’s mansard roof. The building in Art Deco style stems from the year 1911 (1, 2).

An interdisciplinary research project aims to advance understanding of the processes in subduction zones that trigger geological hazards like earthquakes, tsunamis, landslides, and volcanic eruptions when tectonic plates converge.

Burnt remnants from the past may contain information about changes in the direction or intensity of the Earth’s magnetic field. An international team of researchers has used this to analyze destruction layers at archaeological sites in Israel showing how stories in the Old Testament correspond to to real military events.

Biofilms on stone monuments can deteriorate or protect the surface.

Scientists from the University of Bristol‘s Department of Anthropology and Archaeology believe that mysterious stone spheres from the Greek islands were used in ancient board-games.

The Gemological Institute of America (GIA) is a non-profit-organization spreading knowledge, standards, and education in gems and jewelry. It was established in 1931 and is home in Carlsbad, California. At the bottom of its starting page, it monthly features some sorts of gems.

Soapstone pots and a stone slab used for grinding spices are essential parts of the kitchen in South Indian, Times of India daily knows.

Egypt’s oldest tomb oriented to the winter solstice has been discovered in the necropolis of Qubbet el-Hawa (Aswan). There, the sun‘s rays once bathed the statue of a governor of the city of Elephantine who lived at the end of the XII Dynasty, around 1830 B.C.

The British are facing hard times that remind some people of the financial crisis of 2010: On November 17, 2022, Finance Minister Jeremy Hunt announced budget cuts of 55 billion pounds (app. 66 billion US-$).