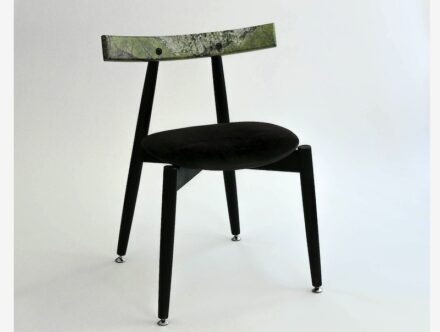 “Ronin“ is a back chair designed by Emil Lagoni Valbak and Frederik Werner for La Chance company from Paris. The design is a graphic interpretation of the “torii“structures at the entrances of Shinto temples. Different types of marble are used for the backrest.

Stonemasons Orianne Pieragnolo and Louis Dutrieux continue to report on their “Route de la Pierre“ by bicycle. The last blog entry deals with practical questions, such as the length of the stages (French / English, 1).

The Menin Gate in Ypres will be restored. It commemorates the victims of the 1st World War and calls for peace. The marble panels with the names of the missing will be renewed, among other works.

Unesco has launched the World Heritage Volunteers 2023 Campaign. Until December 31, 2022, applications are open for youth organizations, NGOs, or public authorities that wish to involve young people in heritage preservation through implementing action camps at World Heritage sites in 2023.

France has published an Observatoire des ressources minérales pour les filières industrielles (OFREMI), which gives an overview of deposit sites for minerals of strategic importance to the economy (French).

Artificial stone manufacturer Neolith was again the luxury sponsor at the gala of Michelin Guides in Spain and Portugal (Guía Michelin de España y Portugal). In 28 of the restaurants so awarded the material was installed, as said in a press release. Other producers of artificial stones, like Cosentino, also rely on professional cooking and the ambiance of private kitchens to promote their products (Spanish).

Equipping Pakistan’s marble sector with modern technology can help boost exports, was one of the results of an expert meeting organized by the Lahore Chamber of Commerce and Industry (LCCI) and Pakistan Stone Development Company (PASDEC).

Planet Mars‘ surface seems to be more active than thought, with mantle plumes pushing the surface upward and causing earthquakes and volcanic eruptions, scientists from the University of Arizona suggest.

Video of the Month: the famous photo of the Earth as “Blue Marble“ in space was shot 50 years ago on December 07, 1972, by Nasa Apollo 17 astronauts. Since 2015, the US space organization has operated a deep space observatory equipped with a special camera regularly taking photos of our planet. The Living Earth Orchestra (LEO) created an almost real-time view of the Earth, showing how the environmental conditions in some regions have changed since then haben (1, 2).