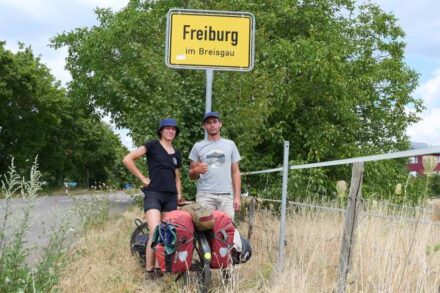 It is known from the American astronauts of the Apollo missions that during the flights to the moon they made a strange observation: you would be on the road for a few days and at the end you would arrive somewhere, but you would not have passed anywhere because the space was really empty. Orianne Pieragnolo and Louis Dutrieux will certainly not have this experience during their “Route de la Pierre“ (Stone Tour), and you can already tell from the first entries in their “Journal de Bord (Logbook) on Facebook: they have already been to Basel and visited the Bauhütte (construction hut) of the cathedral there; most recently, they worked for a stonemason in Germany on Lake Constance, where they learned a lot about the traditions of his profession in Germany.

We give in our report the state of affairs as we go to press on September 20.

On August 24, they had posted an experience familiar to anyone starting an adventure: “Burgundy, from where we left on July 10, already seems on the other side of the world, but from China we got another little breath of air.“ 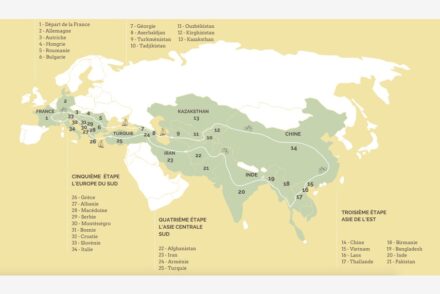 Orianne and Louis are a 27-year-old female stonemason and a 30-year-old male stonemason who have set out on a great journey through Eurasia on bicycles: in 5 years they want to cover 34 countries from eastern France to China and back. The distance is estimated at 36,000 km.

Mind you: it is not simply an extended bicycle tour, but an “expedition,“ as they write, a research trip so to speak: the two want to discover along the old Silk Road the architecture with natural stone there and the (building) culture of the countries, learning from their observations and also bringing along foreign expertise.

Working with local stonemasons is part of the concept, similar to the wanderings of craftsmen. This European tradition also lives on in France, where it bears the title “Compagnons du Devoir et du Tour de France.“

However, their concept is very different: they don’t want to be on the road for a few years at a time, but only cover certain distances during the summers. Afterwards, they return to France to process what they have experienced and learned.

They are also by no means on their own during their tour. 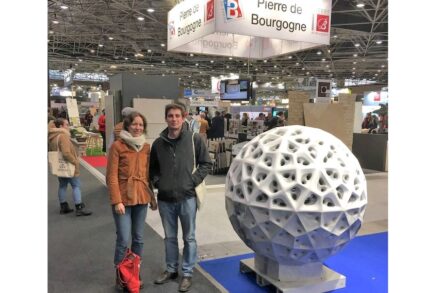 Rather, they have brought a team on board, so to speak, that was involved in the preparation and is virtually part of the game via the Internet while on the road. This team comprises 5 people, as described in the French version of their “Dossier de Presentation“: “There’s Manon, a photographer who will be on site to document our experiences. Estelle, a web developer who will create our website and follow our doings from France. Viviane, an architect, and urban planner who will help us archive the data we collect. Simon, an enthusiastic bike designer, supports us in terms of equipment. Jules, a geopolitical observation enthusiast, who will guide us on our route and warn us of potential dangers on the ground. Claire, whose communication skills and team organization give us valuable advice.“

Once a month, there is an update on the status on a Facebook page.

Currently, they should be making progress on EuroVelo 6 (the European long-distance bike path) downriver along the Danube River. Romania is the preliminary goal.

Next year, the plan is to continue first by ship across the Black Sea and then further along one of the southern arms of the ancient Silk Road from Georgia through the -tan countries to Kazakhstan.

Olianne is an architect and after her studies she turned to stonemasonry. Louis has worked as a stonemason for a long time and has worked on numerous restorations at home and abroad. In 2019, they both traveled to Canada where they fleshed out the idea of their Route de la Pierre.

The 5 years of preparation since then have most recently included a crowdfunding campaign that brought them just over €3900, and in the spring of 2022, a couple of test weeks through France including a visit to the quarry of the limestone Massangi made by the international company Polycor.

During these tours, for example, it was a matter of assembling equipment, including certain stonemasonry tools, and seeing how it could all be packed into four saddlebags. Last winter, they presented their idea at the Rocalia trade show in Lyon.

So far, fate has been kind to them: they have not been affected by the shortage of materials due to the Covid-pandemic and, according to their logbook, they received their new bikes as ordered in February 2022, this including the special adaptations for the long distance tour.

In their first logbook entry, they report a peculiarity in the Europe of the present: on a distance of a few kilometers, they had crossed 3 borders, namely between France, Switzerland, and Germany, and had actually not noticed anything about it. 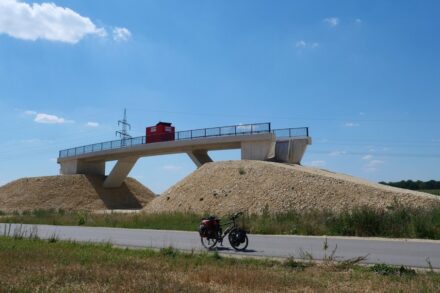