“Fire Plus“ for the energy-saving flaming of stone surfaces 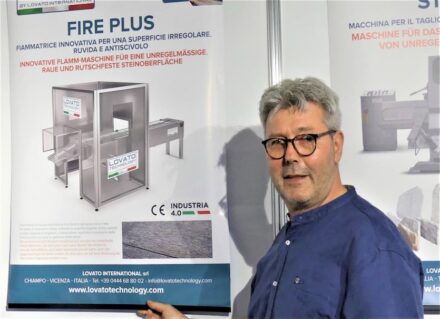 Given current gas prices in the West, the new flaming machine from Lovato International will probably only meet demand from Asia for the time being. Company founder and owner Mariano Lovato presented it at Marmomac 2022: its special feature is that the flames process the stone surface from below – this offers, some advantages: the surface is processed evenly and thus offers optimal slip resistance for the later use of a stone slab for a sidewalk.

During flaming, the top layer of the stone is changed by the heat of the flame and thus acquires tiny irregularities that minimize the risk of slipping. Until now, flaming has usually been done from above and manually, with a worker running gas torches back and forth over the surface.

With “Fire Plus,“ the name of the new device, the flame moves back and forth under the stone under machine control. The device is intended as an extension of the company’s machines, from which the stones emerge with a flat surface. Both, machine flame guidance and smooth surface guarantee uniform processing of the surface.

Other advantages compared to manual flaming are: personnel costs are saved, the processing is faster, and can be set to desired speeds. At the show, Lovato cited “100 square meters per day depending on stone type“ as the maximum throughput.

For cooling, there are tubes under the flame that absorb the heat. In principle, he said, it is possible to enclose the unit and recover some of the heat energy from the chamber.