Swedish Natural Stone Award 2022: the paving of the pedestrian zone in Uppsala as the winning project, a park in Helsingborg and a facility for urn graves as finalists 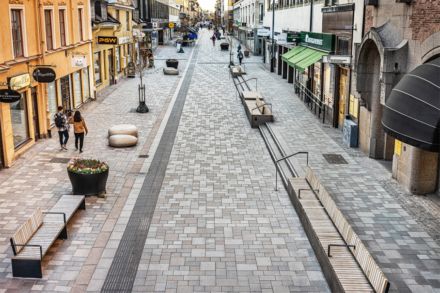 The Swedish natural stone award, “Stenpriset“ in the national language, honors uses of native stone that showcase the aesthetics of the material and its durability. It is also about new ideas for the million-year-old material.

In 2022, the 1st prize went to the architectural studio Karavan for the redesign of the southern part of the pedestrian zone in the city of Uppsala (photo above). The major theme of the plan was how to strengthen an old city center through architectural measures in the face of seemingly overpowering greenfield shopping centers.

Formerly, the narrow street called Södra Gågatan was just a long zone for through traffic and cheap stores. Now it got a high-quality pavement made of native granite, with unmistakable zones for the different traffic flows. Nevertheless, the street has kept its unity, which is due to the tricky paving of the architects: there are 3 types of stones with different colors in different size rectangles, which seem to be placed randomly.

In reality, the puzzle is very precisely planned and distributed over the elongated area according to a specific pattern.

We will report in detail about the project.

The 1st prize was selected from a finalist group with 2 other projects. 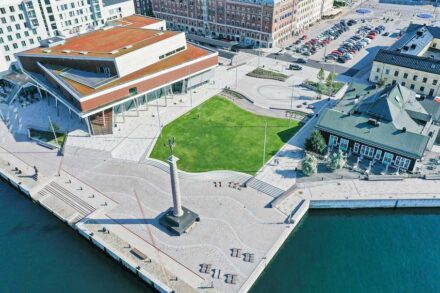 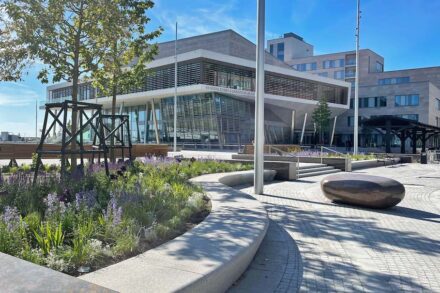 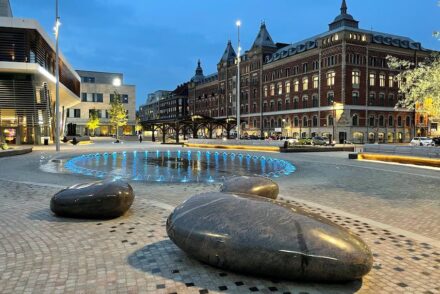 One of the finalists was Ångfärjeparken (Steam Ferry Park) in Helsingborg, the city with the country’s second largest harbor at one of the passages between the Baltic Sea and the North Atlantic. Naturally, the sea suggested itself as a theme in the redesign of this area around a new hotel and congress center and a historic harbor building.

The bird’s eye view shows the design idea best: waves run through the paving and also give shape to the stairs. Four boulders weighing 1 to 3 tons represent the incessant grinding motion of water. Even stone, here: Halland gneiss, is no match for the constant force of the waves.

Bohus granite was used for the paving. Both types of stone have always been part of Helsingborg’s cityscape. Whereby the Halland gneiss, polished to a high sheen in the sunlight, is arranged with its glitter between the wild sea and the charming city. 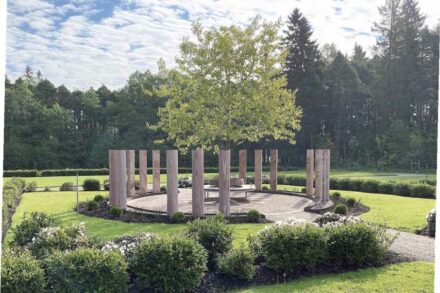 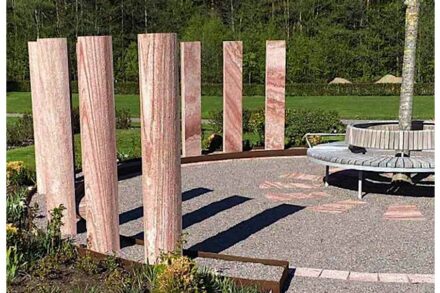 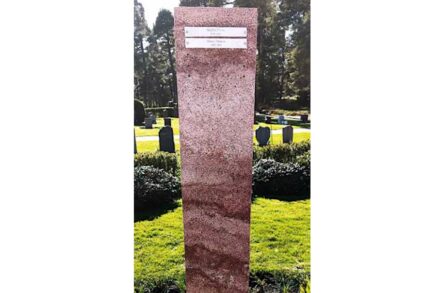 Another finalist was the Urn Cemetery next to Bomhus Church in the town of Gäfle on the other side of the country on the Baltic coast. Architect Monica Sandberg designed it as a circle of stone columns around a tree in the center. The tree has many references:
* it stood there before the cemetery was extended;
* there is a bench around it for the visitors;
* the special wood of this tree species does have echoes of the Älvdal quartzite used for the columns.

The fact that stone was used for the columns has another relation to the surroundings: the old cemetery includes a burial place from the times of the Vikings – actually only a pile of stones left, but an important place for the archaeologists.

The columns are not really columns, but only round on the outside. Inside, they are flat, thus presenting themselves to visitors as walls, so to speak, with the names of the deceased inscribed on gray aluminum plates at the top.

The columns are arranged in groups of three.

The pink Älvdal quartzite is the prominent stone of the region and was used in the past both in construction and for millstones.