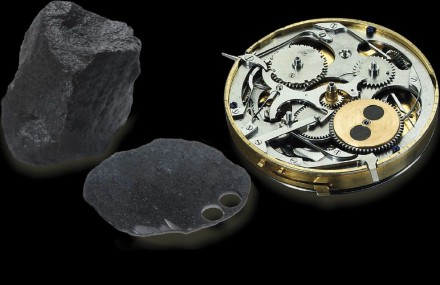 (October 2011) An unusual product idea in stone is presented by the Swiss manufacturer of time pieces Louis Moinet: implementation of moon rock and petrified dinosaur bones. E.g. the face of the model „Magistralis“ shows the phases of the moon and contains two tiny pieces of moon rock.

The model „Jules Verne“ also contains a small piece of the earth’s only natural satellite visible though a bull’s eye at 9 o’clock. The collection was awarded a Red-Dot-Design-prize this year albeit for the innovative design in handling by means of levers rather than for the implementation of outer space accessories.

But back to the space stones. The tiny pieces of moon rock really do stem from the surface of luna even though they were not brought back to earth by Earth’s moon walkers.

They were catapulted to earth as meteorites and that is what makes the rock so special: it was chipped off the surface of the moon when an asteroid hit its surface and, probably after a long journey in space, it was finally caught in planet Earth’s gravitational field coming to rest in the Oman’s Dhofar desert in 2001 according to the Meteoritical Bulletin.

Chips off the old neighbour’s block are much more scarce than meteoritic rock from outer space.

Going one step further, „Astralis“ has an additional clock-face in which four slices of meteoritic rock are inlayed. Here again a slice of Dhofar 459 was implemented as well as a piece of Jiddat al Harasis 479 from Mars, one from Itqiy formed close to the sun and last but not least one piece from Sahara 99555 aged over 4.5 billion years and older than the entire solar system. It could stem from Mercury.

Last year’s novelty also revolves around stone, time and space. The model bears the name „Jurassic Tourbillon“. It has a dial comprising pieces of petrified dinosaur bones around 150 million year old and found in North America.

This year’s new model „Geograph Rainforest“ with two chronograph counter faces made of fossilized palm wood is some 70 million years old. The company supports projects for the preservation of the tropical rain forests of Malaysia with the proceeds.

Louis Moinet Company was named after the famous watch-maker (1768-1853). Swiss by birth he emigrated to Paris where he became art professor and finally worked as a consultant for Abraham-Luis Breguet. Breguet was one of the foremost inventors of modern time-pieces.

The company has its headquarters in Sait-Blaise in Switzerland. It produces no more than 1,000 pieces of each model per year, some of which in limited editions of only 60 or even 12 each.