Architecture: between heaven and earth 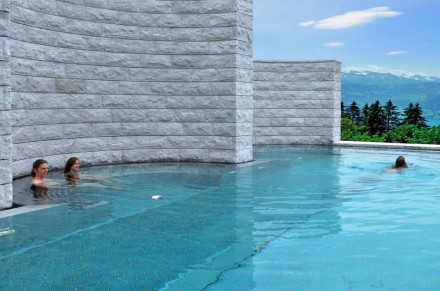 (October 2012) Somewhere between heaven and earth is where hikers visiting the Swiss region of Rigi see the fog-filled valleys all around the massif some 1,450 m above sea level where the air is crisp and clear. From here one can now also observe fish and fowl: in the new Rigi-Kaltbad visitors can swim across the pool out of doors and take in the fantastic view of Lake Lucerne and the Alpine panorama. 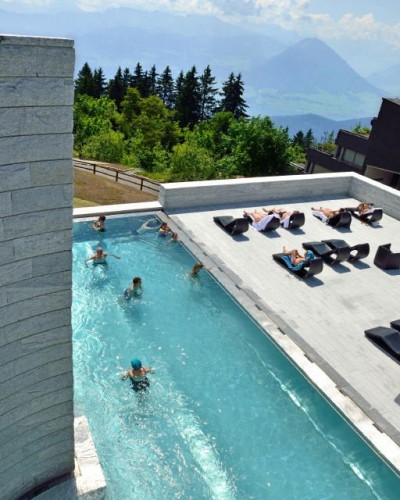 Mario Botta is the architect responsible for this and a number of other stone complexes like the famous church in the Swiss town of Mogno. In the case of Rigi-Kaltbad he implemented Duke White granite from the d’Ossala Valley to clad the building. Maple was used for the sound-absorbing ceiling on the interior complemented by abundant sources of water in the mineral bath and adjacent spa. 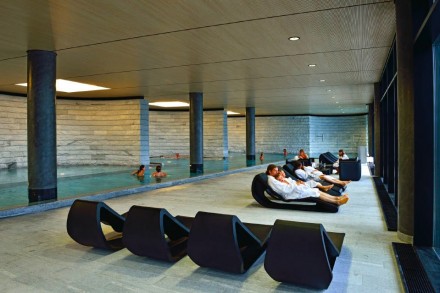 It was the water which initiated the bathing tourist industry in 1545 in Rigi where a chapel was built near the mineral source. The water was very cold for a thermal bath; but the anecdotes around this and other sanitaria in Switzerland are heart-warming: legend has it that a limping stag lumbered to a source of mineral water every day and after taking bath in the healing water marched off steady a foot.

The massif experienced its heyday in the 19th century when a mountain rail was built. Nowadays some 600,000 visitors per year enjoy the view from some 1,800 m above sea level.

Part of the new complex is a public place cobbled in plates of the same granite which doubles as the roof of the water world below partially set into the side of the mountain. The municipality contributed some 1,25 million CHF (~1.2 million €, ~1.6 million US-$) toward the costs in return for a near 80 m long observation deck which also serves as a new village square. The governmental and cantonal funding from Lucerne and Schwyz were also forthcoming. 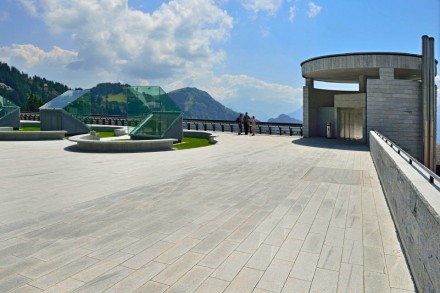 The glass skylights reminiscent of quartz crystal on the observations desk direct light into the spa two stories below. There some rooms are like niches in a rock. 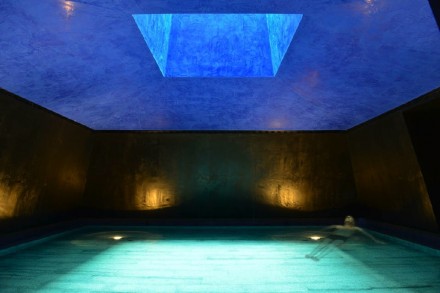 Stone was supplied by Testi Fratelli of Italy. Stone masonry was carried out by the Swiss Natursteine Wüst AG. 8 cm-thick slabs were used throughout. The stone’s front was left with a rough surface. 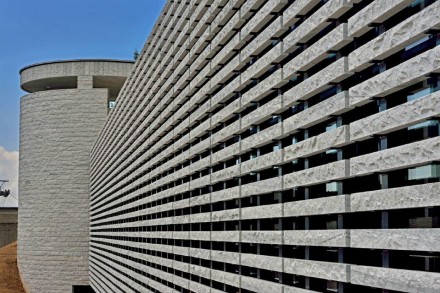 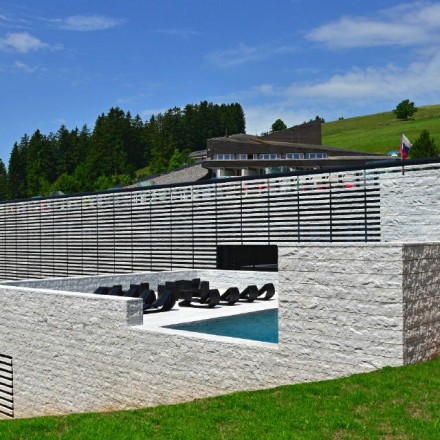 The façade opening toward the valley is clad in stone lamella to break the sharp sun light and camouflage the complex.

The costs totaled 30 million CHF (24.8 million €, 32.3 million US-$). The bath is owned by Real Estate Switzerland of the Credit Suisse Foundation (CSA RES).