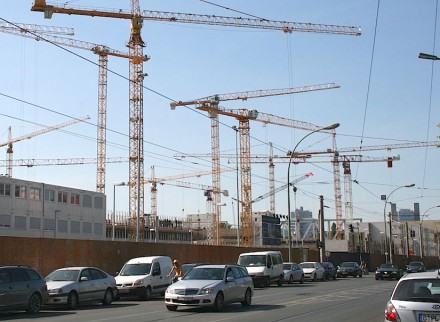 (April 2013) Germany is currently the most interesting market for Europe’s natural stone producers. Germany’s building-industry trade-organization is expecting growth of +3.5% in the home-building sector this year. Reason: the healthy economic situation reflected in low unemployment and secure jobs as well as low lending rates.

After years of painful austerity measures during which government concentrated on reforming the social net and keeping public spending down, German citizens are eager to make up for lost time even investing in high-end building projects. According to one Banking Association (Bundesverband der Deutschen Volksbanken und Raiffeisenbanken (BVR) Germans are investing more and more in material goods and in particular in home real estate.

Interesting to note, too, that German’s outlook on life seems to have changed: whereas Germans were once obsessive money-savers, their frugality seems to have vanished according to the Gesellschaft für Konsumforschung (GfK), a leading market research institute. „The Economic growth of 3.3 % (from 2011 to 2012) was spent one on one in private households“, as was recently reported in the press.

Berlin is of particular interest. Cranes can be seen everywhere, a déja-vu of the post Berlin Wall era after November 1989.

There are a number of reason for the revival:

* the 3.5-million metropolis is eager to make up for lost time, however the initial boom after the fall of the Berlin Wall was interrupted by the Dot-com bubble of 2000 when many projects were put on hold;

* Berlin is profiting from its positive global image: a modern and „trendy“ city according to real estate agents Jones Land LaSalle: „Many a foreign retailer bases his international debut in Berlin to establish a base on the European or German market“, which, in turn, attracts foreign investors.

To name but a few of the current building projects:

* In the district of Mitte building of a superior luxury-class dwelling complex by the name of Kronprinzengärten is under way;

* Leipziger Platz is the site of a grand shopping mall on the historic site of the original Wertheim department store currently under construction;

* All around the new central railway station numerous hotels are under construction – the site goes by the name of Europacity;

* In the West districts near Bahnhof Zoo the newly constructed Waldorf Astoria Hotel recently opened its doors to the public.

Stone-Ideas.com has established a special package-deal to help groups of companies or national trade organizations present themselves successfully at a 2014 construction fair in Berlin. Contact Peter Becker for more information (Mail).