Luminescence in and on marble 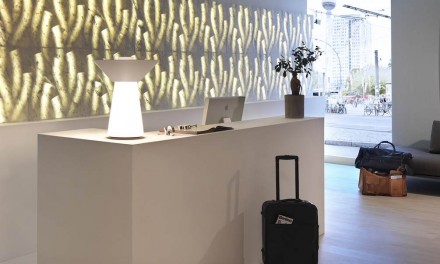 (May 2013) In the presence of children eager to discover the world this new collection could cause some problems: one can easily imagine children switching the light on and off to discover the ever-changing appearance of the material – an effect which Lithos Design was counting on. 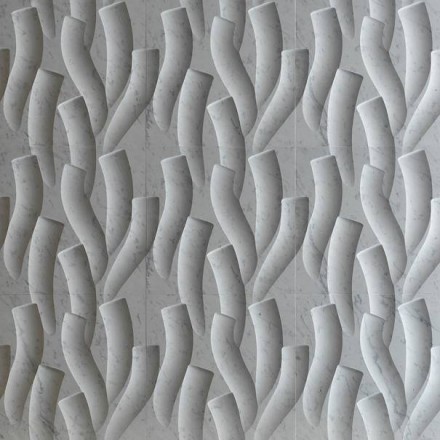 „Le Pietre Luminose“ glowing stone is the name which designer Raffaello Galiotto gave his new creation. Some elements are not new but all in all the combination of natural stone, technology and material delivers a hitherto unattained marketing perspective. 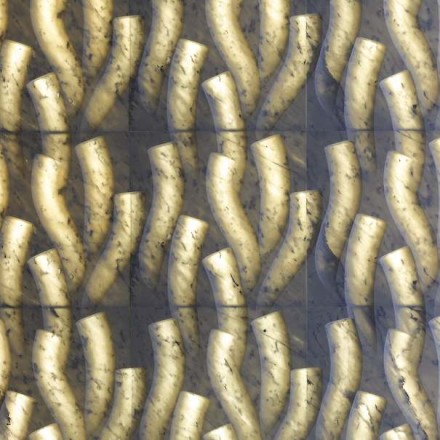 Back-lighting stone and using thin layers to allow translucence is not new, but adding a 3D-effect as Galiotto did, is: he cuts only parts of the tile down by some 5 mm or more. These grooves vary in depth allowing more or less light to shine through the stone.

Rear lighting not only brings out the structure, it also plays with the light and luminescence.

Galiotto and the Lithos’ Designers chose two types of marble, white Ghiaccio and Portuguese Rosa Agata. With other types of stone the 3D-effect could even adopt a fourth dimension – time: Sedimentary stone such as limestone or sandstone could allow a glimpse millions of years back in time.

To no surprise, then, that all eight tiles of the collection were given names of celestial bodies. 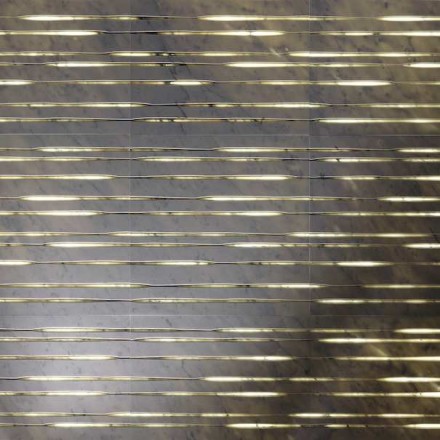 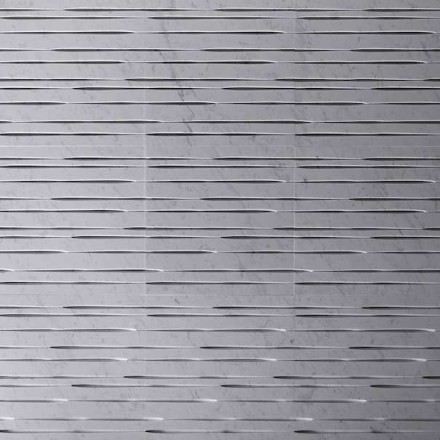 The electrical installation behind Pietre Luminose is entirely innovative: the tile has a 60 x 60 cm metal cassette affixed to the back which contains the lighting fixture comprising 4 neon lights of 14 W.

The cassette (complete with the stone front 11 cm high and weighing some 20 kg) can be mounted next to one another with great precision. Mortise gaps would ruin the effect of the luminescent wall.

Twofold technology, i.e. that of the milled grooves and that of the electrical installation come together to allow mass-production of Pietre Luminose and thus to conquer the market.

And what if one of the neon lights gives out? The cassettes can be opened as the tiles are mounted with the help of two pins and screws. The effort required to change a light, is admittedly quite high: if the light needs to be changed on the bottom tile, all cassettes in the vertical row above must be opened.

Other lighting effects are possible as well, obviously: a ray of light from the top or side gives the installation a different 3D-effect. Of course the light source within the tiles can be dimmed. And, of course, Pietre Luminose comes with its won on-/off switch. 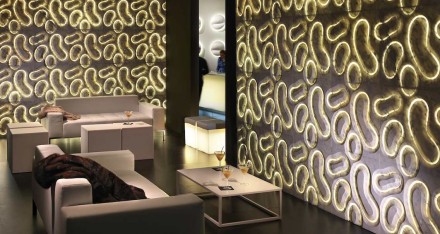 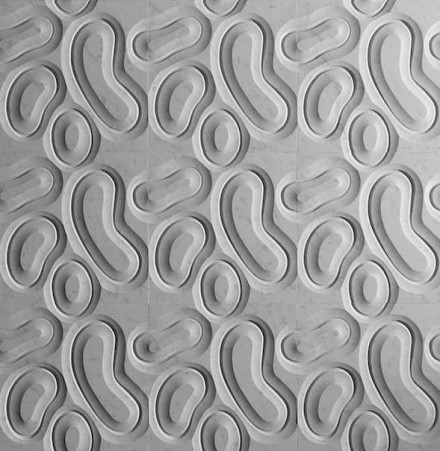 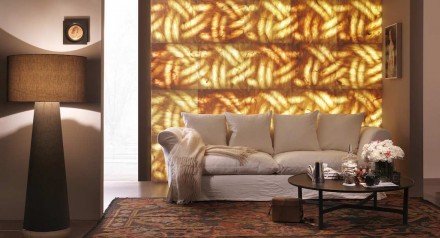 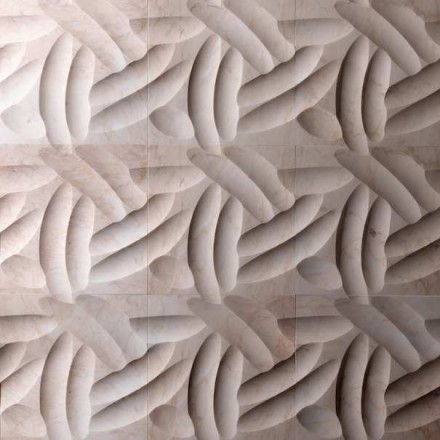 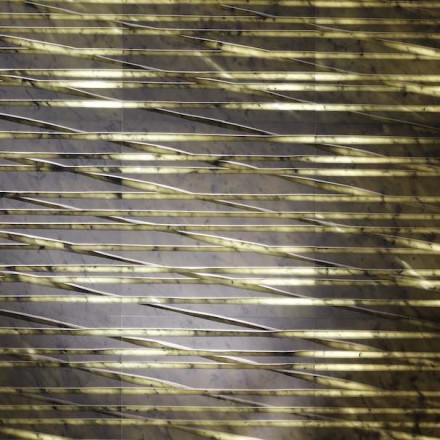 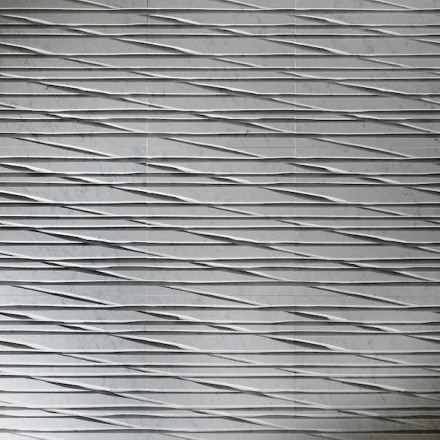 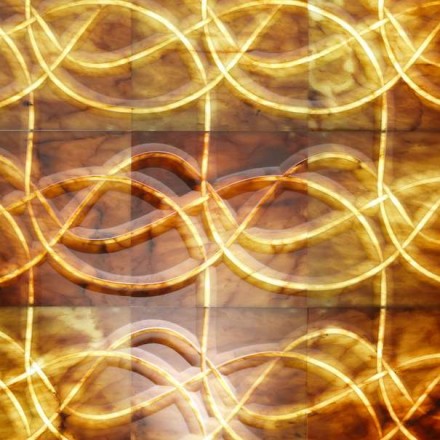 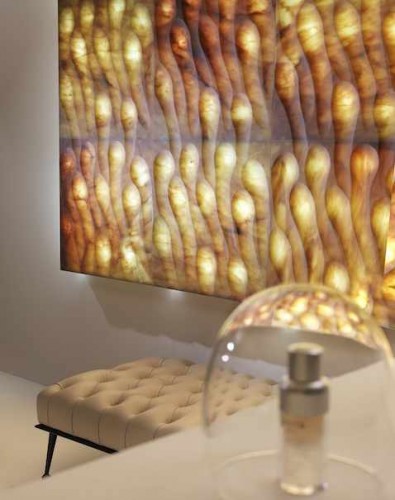 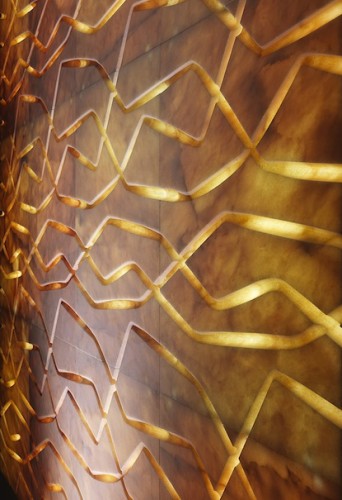