To keep the profession young and to integrate young people 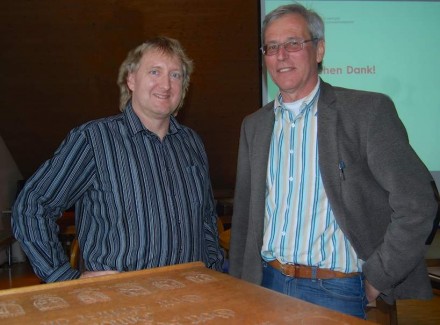 (Mai 2013) Ernesto Ghenzi is the new president of the Swiss association of sculptors and master stone masons. The 53 year old is the successor of Marco Marazzi who stepped down at the turn of the year. Ghenzi had been vice-president before.

One focus of his work as president will be to continue updating the profile of the sculptors’ and master stone masons’ profession, as said in a report by the Zürichsee-Zeitung newspaper. Recently, the association had already launched a new curriculum for apprenticeship and for livelong learning. Ghenzi points out that he wants to bring young people into the natural stone branch and into the association, as one of his aims to be realized in cooperation with the VSBS’ management.

In Rapperswil/St. Gallen Ghenzi runs an atelier and a gallery together with his wife Jasmine. He stems from a family which has been involved in natural stone since 5 generations: great-great-grandfather Julius (1829-1904) worked in the once well known marble village Arzo in Ticino. Ernesto Ghenzi learned the profession at his fathers workshop in Uznach and at Richard Brun’s atelier in Zurich. His brother is owner of a stonemasons’s company with specialization on restoration and a firm for higher level interior decoration.

In 1990 Ghenzi took over his father’s workshop. Later, her spent some time in ateliers in Pietrasanta close to Carrara and travelled the countries of old cultures. Those years were formative for his concept of sculpture, the Zürichsee-Zeitung quotes him.

Mass production is not his thing – a work has to be unique and realized in handwork, he said at a lecture at the Xiamen stone fair’s congress in 2012. Yet in his works also appear ideas of product design: examples are the „Grabzeichen“ (grave signs) which go far beyond normal gravestones by giving detailed information about the dead. 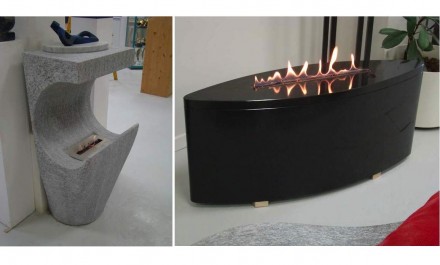 Another example are the „Feuerstellen“ (fireplaces) containing a gas tank with bioethanol feeding the flames. On our photo its Lodrino gneiss (left) and Nero Assoluto gabbro/granite (right).

Searching new ways is one of his ideals, also in marketing. In November 2012, together with his wife (who is a leisure-time-painter) and two other artists, he organized „Kunstvisiten“ (art visits) instead of the normal gallery sales: during three days, guests were invited to enter the ateliers and to follow the creative process. For October 2013 Ghenzi is planning an exhibit of his own works in Rapperswil.

The Swiss association of sculptors and master stone masons (VSBS) counts 201 members according. Its task is PR-work, vocational and livelong training and lobbying. It issues the trade journals „Kunst+Stein“ (art+stone) and „Lapis“.

On this year’s Stone+tec the VSBS will present itself together with the Austrian and the German associations in hall 1. There a competition will take place in which a young stonemason from each country will carve a human head in sandstone.