Wanted: a stone enthusiast to become a TV star 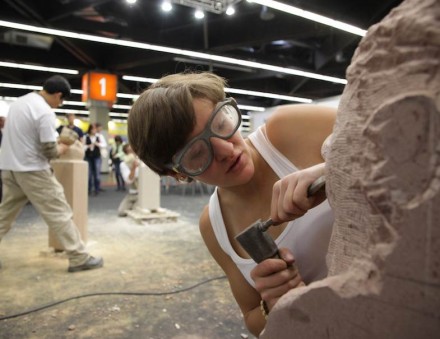 (July 2013) A British television production company called Ricochet is looking for someone learning or enthusiastic about stonemasonry to be a star in a new series it is intending to make that celebrates traditional and contemporary crafts – including stonemasonry.

The company is looking for someone of any age who has some competency in stonemasonry but is still learning the craft.

Ricochet is one of the UK’s leading independent television production companies. Some of its recent series include ‘Born to Be Different’ for Channel 4, ‘Andrew Marr’s Megacities’ for BBC 1, the BAFTA nominated ‘Blood Sweat and T-shirts’ for BBC 1 and BBC 3, and ‘Michel Roux Service’ for BBC 2.

The contemporary crafts programme will aim to both entertain and educate the viewers, so the makers are looking for someone who can present a lively TV personality as well as be good at stonemasonry.

The other crafts the company aims to feature are green wood working, metal work, pottery, weaving, glass and cabinetmaking.

At the end of each period the trainee will have the opportunity to create a final piece to be judged by the leading craftspeople in their fields. One apprentice will be claimed the best and will (hopefully) get the opportunity to turn their passion into a career.

If you think you think this sounds interesting, call Ricochet on Great Britain 01273 224837. You will hear a recorded message asking you to say why you should be chosen – so have something prepared and be enthusiastic. Or you can email and offer your services.

The company is particularly looking for people who can be presented as novices or amateurs who want to make a career (or a new career) of the particular subject. If you fit the bill and want to be on TV, contact Ricochet. If you don’t, but know someone who might, feel free to pass this on.