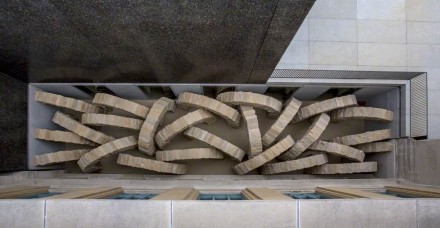 (August 2013) Andy Goldworthy’s „Stone Sea“ arches evoke a slightly eerie feeling bridging the old and new wings of the St. Louis Art Museum (SLAM). The view from the vantage of the terrace above might create the illusion of sandworms or water snakes winding their way through and to the surface only to submerge and disappear again down below. 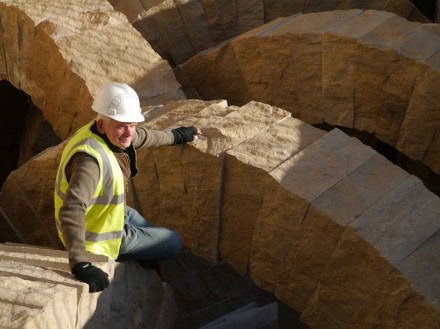 The British artist describes how his piece ensued: He recounts having stood on the meadow where the new wing was later built and asking himself what lay under the surface and what would come of the back-dirt once excavation had begun.

A massive layer of limestone comprising of the remains of countless crustaceans and seashells, whose home the shallow sea once was, extends beneath the metropolis.

Goldsworthy had originally planned to use the back-dirt for his piece but the material was too brittle and fragile. So he took recourse to the Perryville quarry some 110 km away, from where the stone for the old museum’s façade and that of a number of other buildings in St. Louis originated. The quarry is run by Earthworks Company. 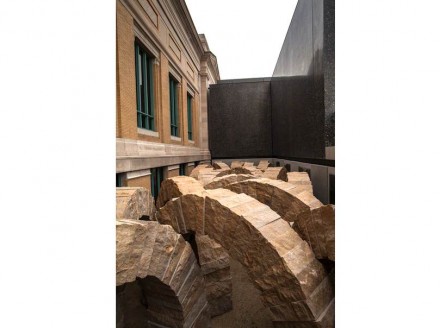 „Stone is on a geological journey“, writes Goldsworthy, and giving the movement a stage upon which the arches could intertwine and mingle was the aim of his piece. 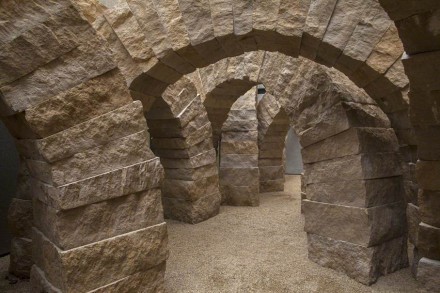 But geological movement can be threatening as well. Not really far away, the New Madrid Seismic Zone was the site of the 1811 earthquake which modified the bed of the Mississippi river and let the Ohio flow backwards for some time. Geologists predict another earthquake in the foreseeable future. 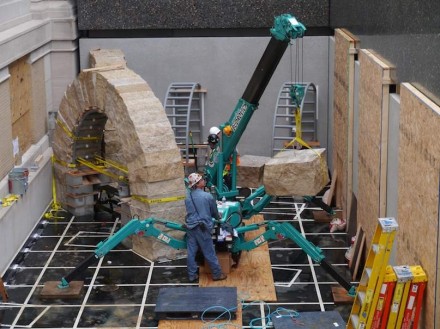 But arches also symbolize detachment of man from nature’s grip and a move toward civilization. Also bridges close the gaps and provide pathways. 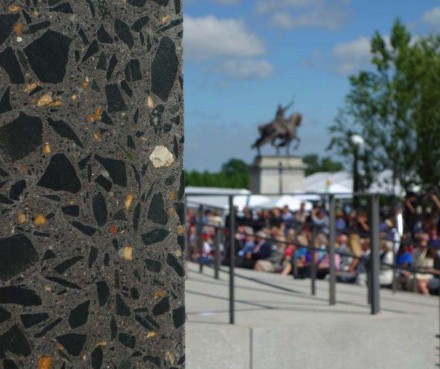 The new East Wing, by architect David Chipperfield, also contains an reference to nature, what with its high concrete walls and glass surfaces: the mottled béton brut-surfaces containing sediments of the Mississippi river bed provide a contrast to the elegant polished surface.

By the way, St. Louis boasts the „Gateway Arch“ by Eero Saarinen, reminding beholders of the settlers’ conquest of the American West – another symbol of change.