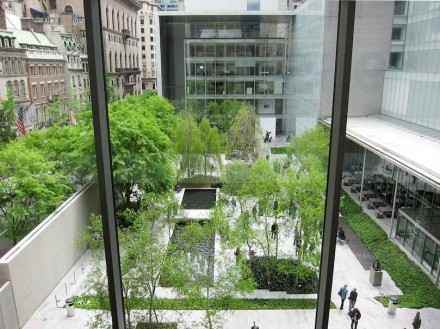 (September 2013) Beginning September 9, 2013, The Museum of Modern Art’s Abby Aldrich Rockefeller Sculpture Garden will be open free of charge to the general public daily, from 9:00 to 10:15 a.m. The early morning hours will be in effect year-round, weather permitting. The public can enter the outdoor space directly through the west gate on West 54 Street, between Fifth and Sixth avenues. Coffee and beverages will be available for purchase.

The Museum galleries open to the public daily at 10:30 a.m.

The new installation in the Sculpture Garden is The Modern Monument, which brings together diverse works organized around the theme of the modern monument. Included are Barnett Newman’s Broken Obelisk (1967), which does not commemorate a specific event but, rather, serves as a symbolic monument for all people; and Pablo Picasso’s Monument (1972), a memorial for the French poet Guillaume Apollinaire, who died of influenza at the end of World War I. 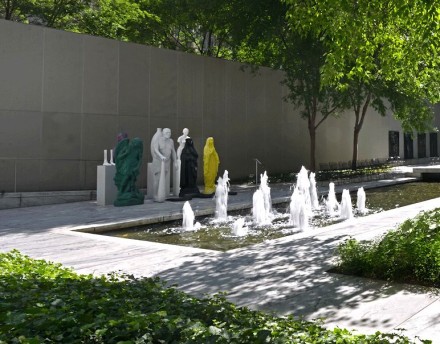 These two works are joined by German artist Katharina Fritsch’s Figurengruppe/Group of Figures (2006–08), which comprises nine boldly colored, life-size figures, among them St. Michael, a Madonna, a giant, and a snake.

Favorites like Picasso’s She-Goat (1950) and Joan Miró’s Moonbird (1966) are shown alongside works by Alberto Giacometti, Henri Matisse, Mark di Suvero, Tony Smith, and others. Also on view, in conjunction with the recent exhibition Claes Oldenburg: The Street and The Store, is Oldenburg’s Geometric Mouse, Scale A (1975), a large painted aluminum and steel sculpture of a mouse, whose form the artist based on both Mickey Mouse and a film camera.

In 2004, the Sculpture Garden had been restored to Philip Johnson’s original 1953 design by Yoshio Taniguchi. Taniguchi enlarged the garden to 21,400 square feet and re-established the southern terrace, which is now an elegant outdoor patio for The Modern Restaurant. For the floor, he used two marbles from Georgia, Solar and Pearl Grey, supplied by Georgia Marble Company/Polycor.

Yearly exhibitions are presented in the Garden, and it has been the home of Summergarden since 1971. Views of the Garden are available from numerous vantage points throughout the Museum.

Marble floor in the Sculpture Garden