MIA-Pinnacle-Awards: light and dark in a three-dimensional natural stone wall 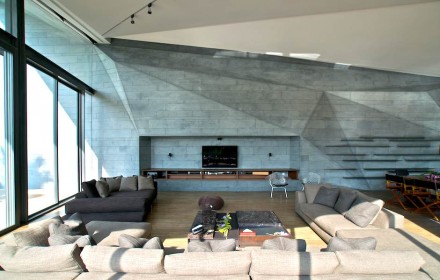 (September 2013) Light and shade can be used as design elements in such a way that sun rays create a changing pattern. The same effect can be created without sunlight using only the third dimension jutting out of the wall’s surface as demonstrated on a living room wall in the Krungthep Kreetha Residence in Bangkok. The lines on the wall can be interpreted as rays of light.

The unusual design idea received one of this year’s Pinnacle Awards of the Marble Institute of America (MIA). The same dwelling had received a prize in 2011 for its exterior cladding solution in stone.

But jut-outs on a wall surface of this sort pose a particular challenge. Interior Architects 49 Ltd solicited the assistance of Philippe Narbonne of Thailand’s Stones and Roses International Natural Stone Company, who looks back on copious experience in the field, many examples of which can be viewed on his web page. His claim to fame is playing with light. In a mail he even demurely claims to do nothing else.

The construction with which the cladding was wall-mounted also was a challenge in itself. 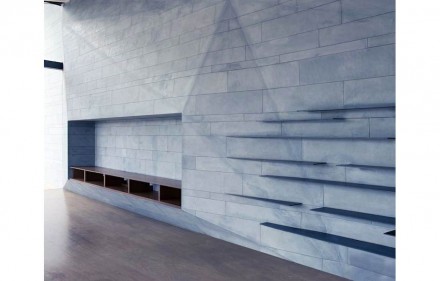 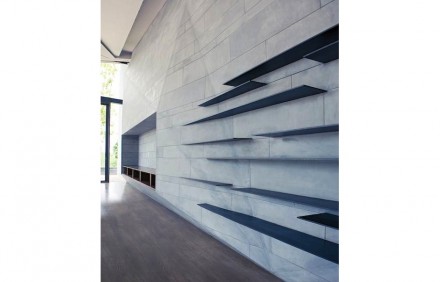 The contrasts are emphasized by the material used: rough-grinded slate was implemented. This surface treatment lightens the color of the stone according to Philippe Narbonne: „It almost lets it float.“

The picture at the top demonstrates this effect. When light falls through the window at the left the play of dark and light continues throughout the room. 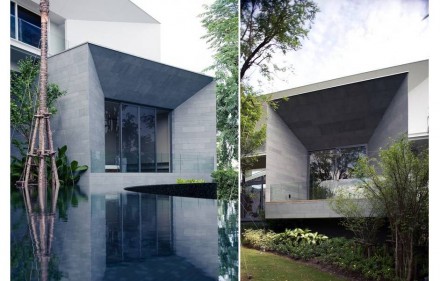 Slate and the repetition of the tiles continue along the outer walls of the building. Here, too, surprising shapes and effects, e.g. in the case of the window front, come to play. 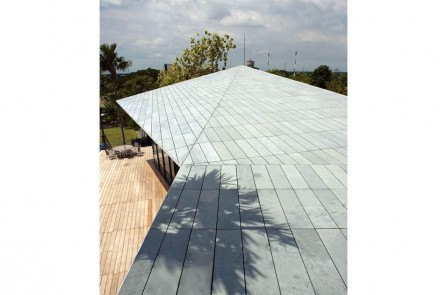 The roof is covered in slate tiles for continuation. Two balconies allow a view unto the rooftop.

The blue-grey color of the slate is most attractive in the early morning sunlight when the mist enshrouds the tropical palm trees and the dwelling and its surroundings appears soft and fuzzy.

Later when the sun has risen the strong light splits the world into light and dark.

Black slate was used as flooring. 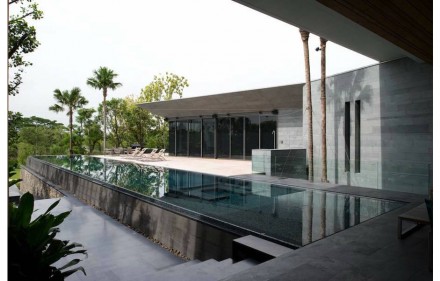