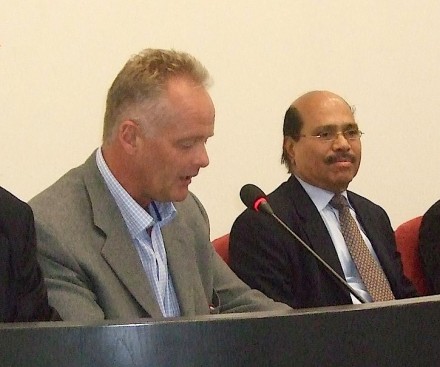 The announcement was made on the rim of the Marmomacc Trade Fair. Thus Norway – we jokingly note – tips the global scales in its favor: Euroroc, the umbrella organization of national trade organizations, is also lead by a Norwegian.

Wonasa’s  John-Petter Gundersen follows in the steps of R. Veeramani (India), who acted as founding president and was in office for a period of 3 years before stepping down.

A press release states that Wonasa has 51 members from 17 countries. Activities are the publication of „Do You Know?“, translated into 8 languages  in which the 10 advantages of natural stone are expounded on 2 pages. Wonasa entertained a stand and was represented at the fairs in Vitória, Xiamen, Moscow and Verona.  Members held talks for Polish architects at an event in Warsaw, and a natural stone guide for architects and designers was compiled and will be published digitally shortly.

Wonasa is carrying half the costs of a Euroroc-Study, which bears the title „Hard Floor Coverings. A comparative study“ in which flooring material is compared and unbiased advice is given to interested parties. The bottom line is that all materials including ceramic tiles and engineered stone has its advantages depending on consumer’s taste and preference.  „But: if respect of nature, sustainable thinking and green values matter the, Oscar goes to Natural Stone“.

We will report on this study in more detail in a subsequent publication.