Sculptor Tobel: „China is an interesting location for artists“ 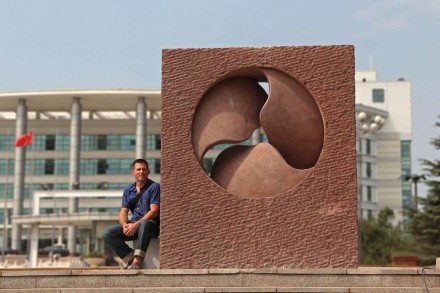 (December 2013) „China is an interesting location for artists: sculptures are being erected in a number of locations“, according to sculptor Tobel. He has just recently set up a sculpture by the name of „Energy“ in Qingdao Province Blue Silicon Valley high-tech sculpture garden (see above). 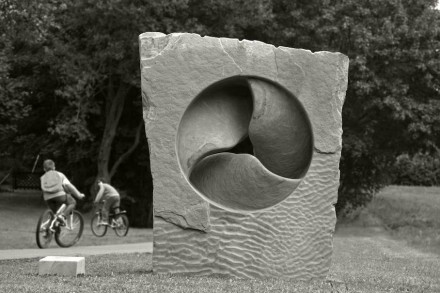 The sculpture was copied at site by Chinese laborers using Tobel’s blue prints. We asked some questions (see below).

But first to the artist himself. 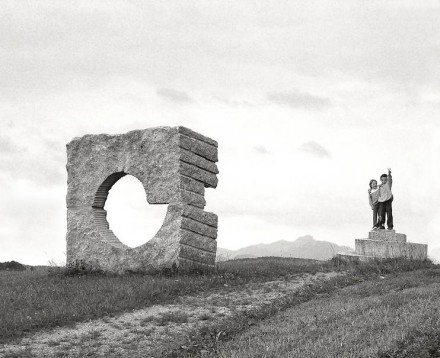 Many of his sculptures are life-size without being monumental. Tobel sees but a piece of nature in them which he has formed to suit his needs. „My home is on the countryside amidst meadows and woods on the bank of a stream. This is my idea workshop. This is where all my drafts and drawings originate“ he writes when questioned on the source of his inspiration. 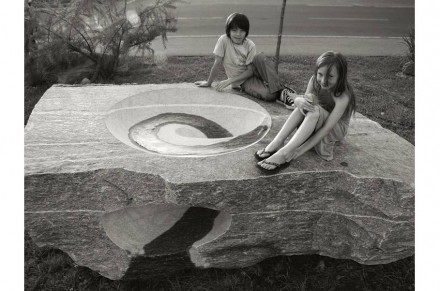 The metamorphosis of the stone he uses takes place more on the inside of the block than on the outside. The exterior is usually left raw but the interior is carved out often to spiral shapes which might include coils, tunnels and caves.

Tobel’s family roots look back on a long family line of artists. His great grandfather was a Munich sculptor, and his mother, Lotte Koch, is a well-known artist. Tobel learned to sculpt abroad where he absolved an apprenticeship in stone masonry and studies fine arts majoring in sculpting. In the past he often spent time climbing in America and the Himalayas. In the last years, he has been seen at a lot of sculpting symposia around the globe. 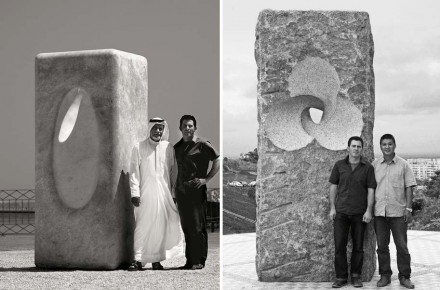 Recently, he has been asked to act as curator for the organizers of such events. This year he called to life an international symposium of his own in cooperation with the Valley-based art association Kunstdünger situated near Munich.

Stone-Ideas.com: In the case of „Energy” in Qingdao you used an original work of art and reduced it to a model on a scale of 1:10 which you shipped to China. It was replicated in its original format by local masons. Is this procedure not unusual?
Tobel: In China this is common for artists of a certain standing not to work the stone themselves. At home, we, too, have artists who have made a name for themselves and entertain an atelier. In the case of „Energy“ I was constantly supplied with photos showing the progress of the work. Finally I spent a week on site to gain a personal impression. Then there was the official unveiling and finally the payment.

Stone-Ideas.com: Could such telecommuting become a working model for artists in the future?
Tobel: I have too few commissions from China as to allow me to judge. But for me it is a welcome change and to date, a good source of extra income.

Stone-Ideas.com: Would exporting pieces of art from the Western world to China be a viable alternative?
Tobel: I don’t think this would be feasible on a large scale if at all. It is much cheaper to have the works of art sculpted in China. A laborer in China earns about 100 € a month.

Stone-Ideas.com: How did your contractors in China find you?
Tobel: I have a network. Once in a while I receive an official tender.

Stone-Ideas.com: What will happen next in China?
Tobel: Currently I’m working on my next project, this time in Fujian province where Xiamen is situated. In spring a 6 m granite sculpture of mine will be inaugurated.