„Geometrie“ collection by Monitillo Marmi: on a slant but in symmetry 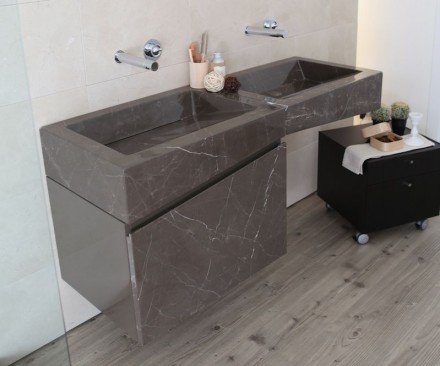 Slanted lines are not everyone’s cup of tea. On the other hand, right angles can become boring. Midway between: the trapezoid, a convex quadrilateral with at least one pair of parallel sides. Monitillo Marmi Company, based in Southern Italy, has used the geometric form as an inspiration for its bathroom décor.
„Geometrie“ is the name of the collection. 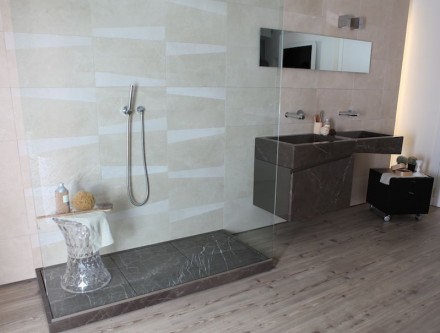 Three rows of trapezoids in two tones set unmistakable accents. At the very first glance, it is clear that this is the shower. But the slanted lines are bound by the tiles into which the elements are integrated. Polished Crema Marfil limestone, and in the case of the lighter elements, charred stone of the same type were implemented. 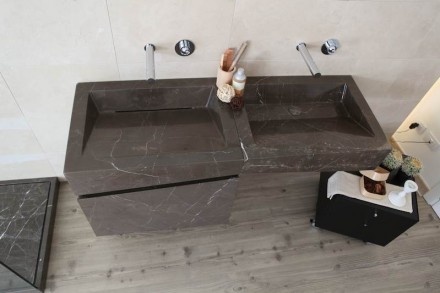 Asp Progetti designers repeated the geometric play in the wash-basin console, which perpetuates the trapezoid shapes. The sink – also in trapezoid shapes but made of darker Brown Amani limestone is complemented by the container element which tucks neatly in under the vanity, and with its stringent right angles, sets a contrast to the unusual design idea.
A variety of stone types can be mixed and matched at the whim of the client.
Stone work was realized by Monitillo Marmi Company of Altamura, Apulia at the very southern tip of Italy.