MIA-Pinnacle Awards: black basalt for „an atmosphere of spirituality and refinement“ 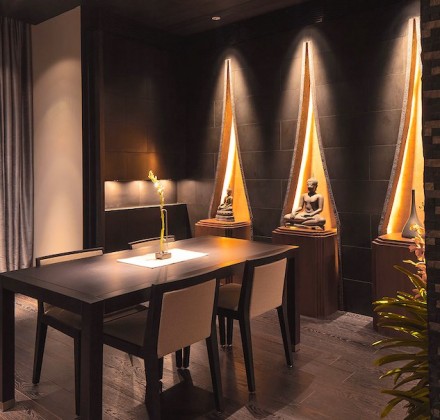 Thai art and architecture define this dwelling in Bangkok. More precisely: the ancient Sukhothai-culture with Stupa-Temples among other elements of the religion. Stone masonry work was realized by the local Stones and Roses Intl Company, for which it was awarded this year’s Pinnacle Award by the Marble Institute of America (MIA).

In its abstract, MIA shows its fascination with Asian culture: „The design aims to theatrically create an atmosphere conducive of spirituality, serenity and refinement“. Planning was carried out by Gooseberry Design. 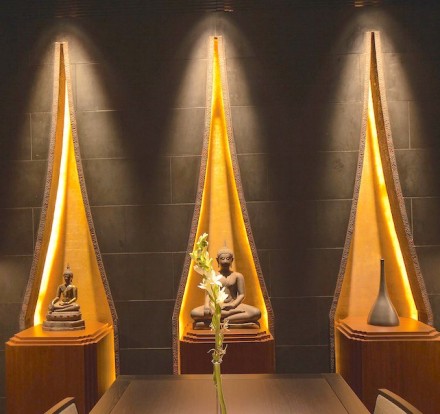 The black honed basalt is a distinguishing factor in creating the refined atmosphere. The spotlight directed unto works of art is a design keynote reproducing the shape of the Cetiya, a temple spire, typical of Thai Buddhist temples. 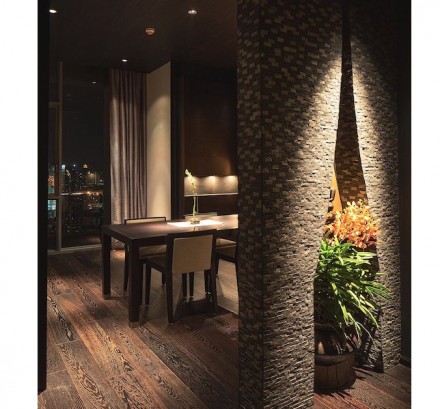 The same motif is evident when entering the dwelling: here a room divider between dining room and foyer – enlarged to an arch, under which an impressive plant can be seen on our photo. The arch is made of chunks of natural sandstone and titanium ore a metaphor on the brick walls of Thailand’s Stupas. 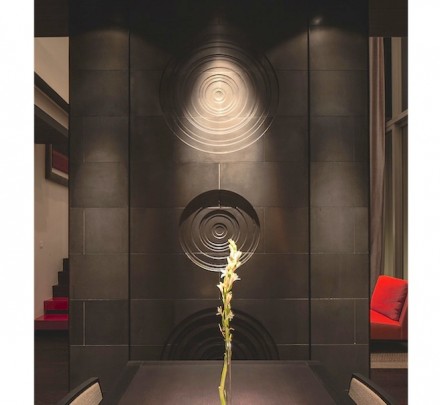 The basalt wall with its Mandalas arranged in concentric circles used for meditation and religious rituals is very effective. Here the rings are honed out with the aid of a CNC-lathe. The inner shape is hand-finished. The joints are pronounced, in an analogy to the massive natural stone walls of the temple complex with inherent wide gaps between the stone blocks. 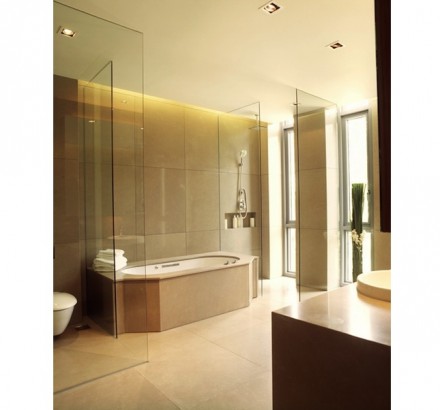 Stones and Roses Intl also realized the stone masonry in the bathrooms and in the elevator-hallway.

The condominium is situated on the 32nd floor of The Sukhothai Residences. It includes a second story in which the sleeping quarters etc. are situated. 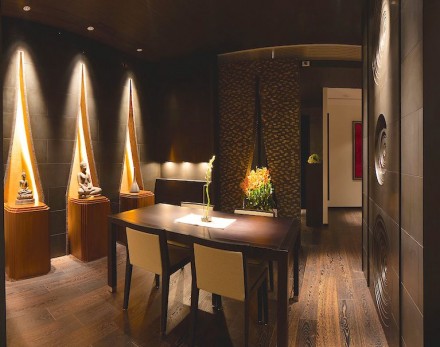 The name was derived from the Temple City Sukhothai, the heritage site, which, together with the neighboring settlement has achieved the UNESCO World Heritage-status. Its prime age was reached from the 13th to 15th century AD when it was the capitol of the Kingdom of Siam, situated in the northern half of what is known as Thailand today.

The Sukhothai-Period not only provided anthropologists with unique evidence of architecture and epigraphic evidence of the times but also disclosed astounding technology in water-resource-management. Reservoirs and ponds were established for constant supplies of drinking water, crop irrigation and religious rituals.
Stones and Roses International