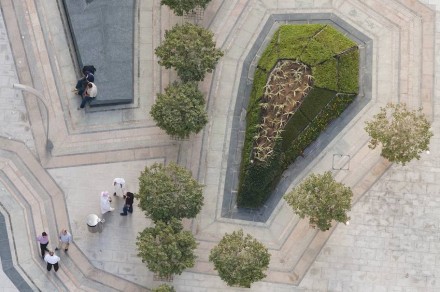 US-American native artist and landscape architect Martha Schwartz created a green center in Abu Dhabi’s Sowwah Square District in desert style. One might think that she hauled in sand dunes to the capital of the United Arab Emirates. Not so – however there is a clear reference to the landscape just outside the city’s gateway what with its high-rise office and hotel buildings amid green rolling hills.

But the arrangement of Sowwah Square unmistakably also reflects its business atmosphere. The concept is well-known, e.g. from New York City where white collar workers pour out of their high-rise offices to enjoy a breath of fresh air and some rays during their lunch-break. 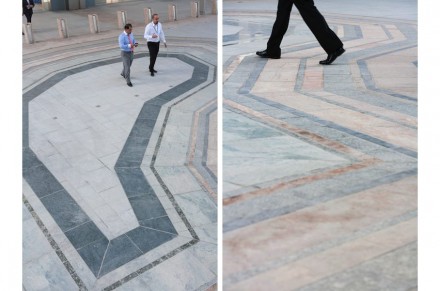 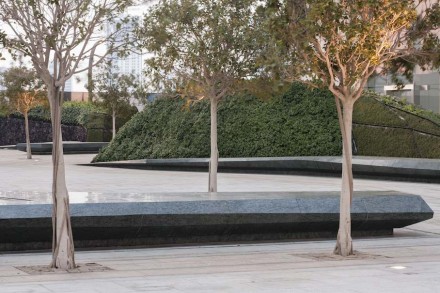 She converged shape and function in a highly refined manner where the artificial hills provide protection from the Shamal wind which often sweeps across the Gulf region with unrelenting force. 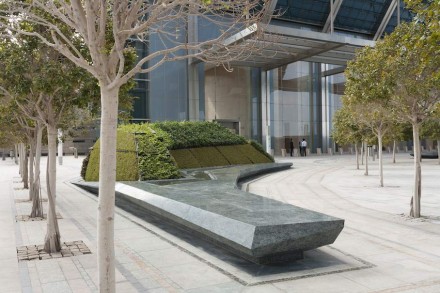 Seating is provided in form of natural stone benches all around the hills; a concept found in business centers in the Western World. But Martha Schwartz gives them a special function as well: small water-ways are incorporated in the arrangement, to lend a pleasant cooling climate by evaporation. Steps in the water-ways in traditional Falaj-irrigation-style allow for pleasant acoustic and haptic impressions due to the cascading water. 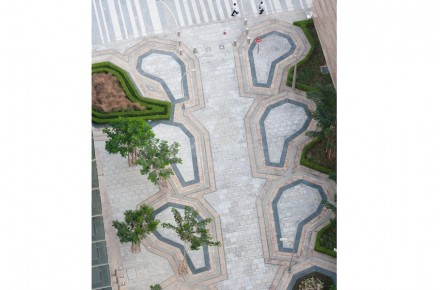 An additional reference to the traditional regional style is the created by the multi-colored granite lines in the pavement resembling a woven Bedouin rug. 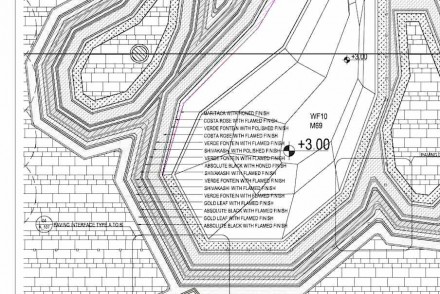 A detail from the blue-prints shows the great variety of stone types used to adorn the surface.

The steep hills allow for far more vegetation than horizontal surfaces would do. The green was chosen for heat and drought-resilience – only plants requiring a minimum of care were used but with a maximum of color variety in foliage and blossom.

Trees are of the ficus family, which, when fully grown, will provide a cooling roof to offer protection from the sun. As the trees branch out above 3 m, the open character of the green oasis remains intact.

Sowwah Square is part of Abu Dhabi’s Al Mariyah Island, where a new complex with offices, hotels and high-end shops and recreation areas is currently being built. Here some 12,000 citizens will soon be working. Martha Schwartz’s oasis measuring some 2.6 hectares was completed in 2012. The project was awarded the LEED Gold Seal for sustainability. 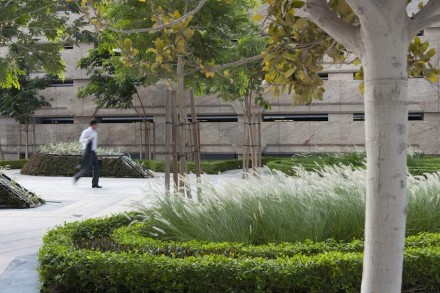 Midriff-high grass adorns the gateway allowing a clear view into the area and inviting passers-by to come in for a rest. When the Shamal wind sweeps over the grass, a very special ambiance is created. The low hedges surrounding the area are often seen in Arab countries. 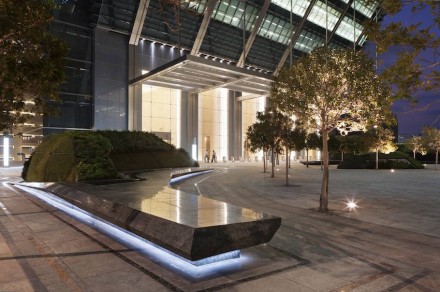