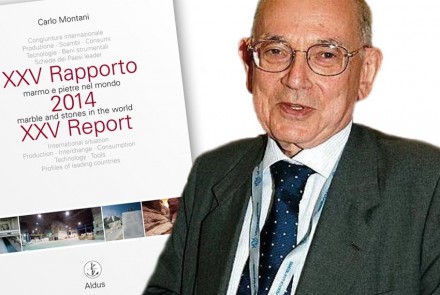 Dr. Carlo Montani’s statistical yearbook for the stone branch appeared in its 25th edition this year. And, as always, the humble master of numbers had a pleasant flash-back at hand: Turn-over of natural stone has been on the increase continuously world-wide for the last two and a half decades, as has been stone consumption beating even the average rate of economic growth.

Despite the recession during the 2008/2009 crisis one could say, stone is not merely a material with a long life span. It is a sure investment in times of economic uncertainty – at least the branch seems to know how to negotiate the times of crisis. This is particularly interesting considering that all the companies involved are small or medium-sized enterprises. There is no natural-stone-„Industry“ with companies employing a staff of 1000 or more anywhere in the world.

Montani concentrated his flash-back on figures compiled in the last decade: net production of natural stone was up by 7% per year, international trade by more than 10% on average. 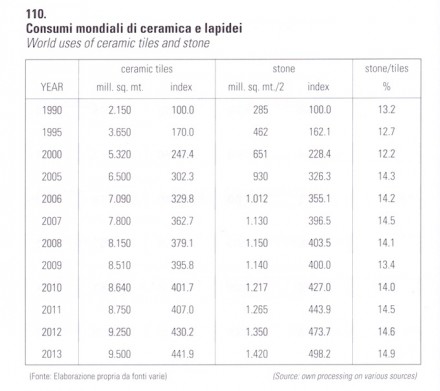 With great satisfaction he added that the largest competitor, the ceramic industry, could show but small growth-rates, as can be seen in the table above.

As usual Montani pointed out that competition is moving in different levels. And, as usual, he encouraged the stone branch to invest more time and money in marketing. 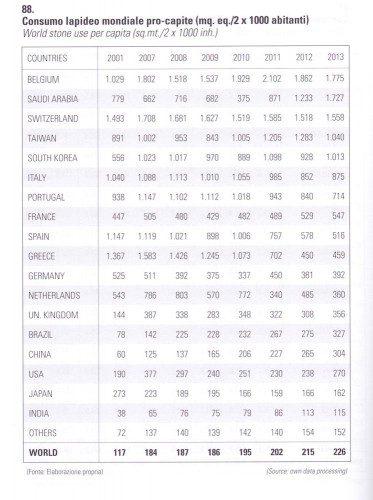 Prorata consumption broken down by country is particularly interesting as the table below shows. Five States surpass the magic 1 m² pp mark. But former third-world countries such as Brazil, China and India have seen strong growth. Unexpectedly low, the rate of growth for the USA which, however is balanced by the high level of population.

Germany, however, despite its high level of population showed negative growth.

With these figures in mind, Montani’s conclusion that more must be invested in marketing is certainly correct. The new markets, e.g. in former third world countries require farsighted measures. „There are good reasons to avoid a dangerous promotional concentration in few developed countries, especially from the West.“

As far as „Planet- China“ is concerned, as Montanis describes the powerful market, he foresees growth in imports of raw material only. Exports were down. 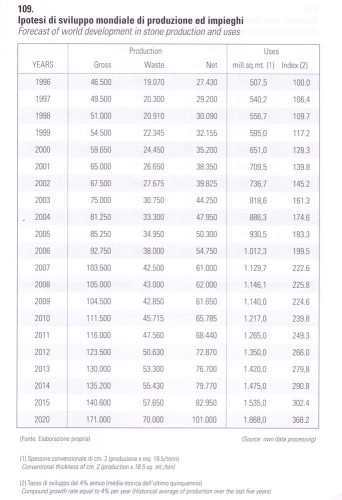 Tables: Excerpt from the book