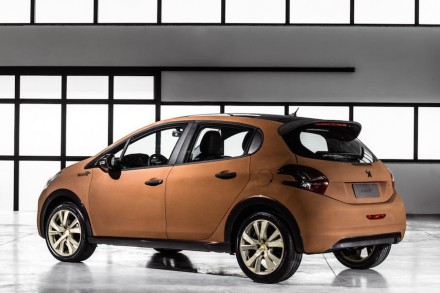 On the occasion of the São Paulo Motor Show 2014, Peugeot came up with a marketing idea: for its 208 Model, endearingly referred to as „the little lion“ by trade journalists, the manufacturer used recycled and natural products within given limits.

The „208 Natural“ was introduced on the occasion of the 15th jubilee of the Peugeot-ONF Forest Carbon Sink Project, for which the automobile manufacturer is generously funding a reforestation in the Amazon Rainforest, were some 10,000 hectares of rainforest or over 2 million trees have already been replenished. The aim is to reduce some of the carbon dioxide emissions to the atmosphere. 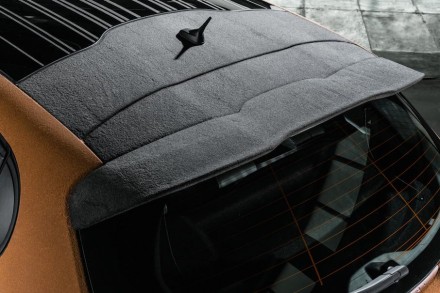 Let us turn to the material used in „208 Natural“. Natural stone was used as the cladding for the rear spoiler, more specifically XStone, a 2.5 – 3 mm thick sandstone.

Our photo barely shows the stone as such. For one thing, the spoiler was colored gray to blend with the earth-based mineral point. And for another, the angle of the camera fails to bring out the natural structures of the stone.

But first and foremost, it is important that the manufacturer wanted to implement natural stone for the „208 Natural“, presumably because of the positive image of the material. There are no convincing functional reasons to use natural stone for the rear spoiler. Peugeot’s claim that stone acts as a heat buffer and thus helps reduce energy consumption of the air conditioning for the interior of the car, is advertising fiction.

But the press release pleases us particularly in this respect: in fact natural stone can help reduce costs for heating as well as for cooling as demonstrated in a number of buildings made of massif raw blocks. 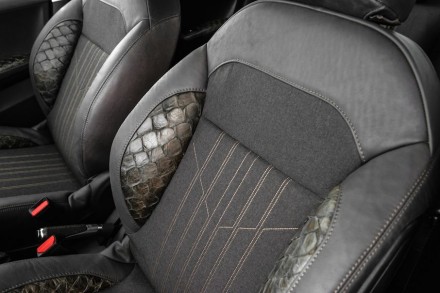 Brazil’s aeronautic expert Embraer was involved in the material concept for the new „208 Natural“. Carbon fibers were reclaimed from old jet planes and the floor coverings were made of recycled rubber tires. The leather-like scaly skin of the Pirarucu fish was used for parts of the seats and arm-rests, among others. 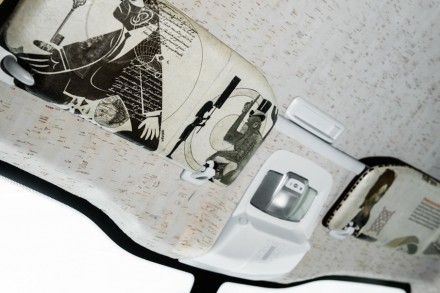 A great deal more could be reported regarding material design e.g. the use of recycled paper or cork for the roof. 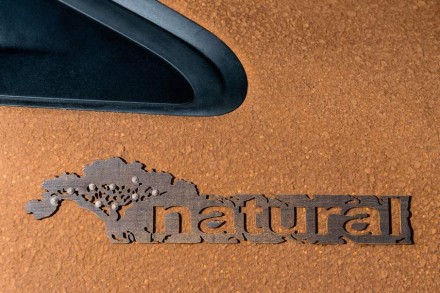 The logo of the „208 Natura“ is a stylized brazil-wood tree, however in bamboo. Brazilwood has become rare and is consequently being replenished within the frame of the Amazonia-Project.

We won’t go into any more detail, as in sum a mere 68 kg of the 970 kg total weight of the car went into setting ecological signals. The Swarovski-Crystals nonchalantly strewn over the dashboard and the logo may be worth mentioning even if they have nothing to do with ecology.

XStone is manufactured by CortileXStoneGroup and marketed in Latinamerika by BCGroup. Depending on the type of sandstone desired a variety described as „Marble“ is available, distinguished by its smooth surface and structure resembling that of the name-giving stone.

XStone is used principally for interior as well as exterior wall claddings as well as for furniture and designer objects. More implementations result from the possibility to dye the stone.