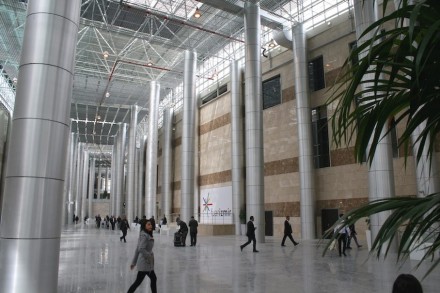 A gem for presenting natural stone: Izmir’s new Trade Fair Grounds on a site already chockfull of extraordinary travertine and marble, is outstanding. But at this year’s opening of the 21st Marble Trade Fair (March 25th to 28th 2015) a number of complaints from exhibitors were voiced as the Organization was not up to expectations.

Note that the Fair was faced with two sweeping reforms. The event not only changed venues from the city center to the new buildings in the Gaziemir district near Izmir International Airport. But the entire staff was replaced by a new team. The city as fair owner had been upset about the handling of a past event and demanded this radical measure.
Thus the personnel was faced with a Herculean Task.

But some shortcomings were difficult to swallow, e.g. the fact that some exhibitors had no logo or identification at their stands or the fact that stands had no furbishing. Some areas gave the impression that the builders had been pulled out just minutes before.

Disbelief was the only description to meet the very poor telephone reception and the intermittent internet access. Is it possible in that the past 11 years during which the project has been in planning and realization no one noticed that the trade fair grounds are situated in a dead zone?

On a brighter note: the planners solved the challenge of a building on a steep hill brilliantly: the hill-side grounds were topographically unsuitable as a venue for trade fairs. But by adopting an idea long since used by vintners and olive growers, a solution was at hand. The property was terraced and the halls connected in a number of levels in descending order. 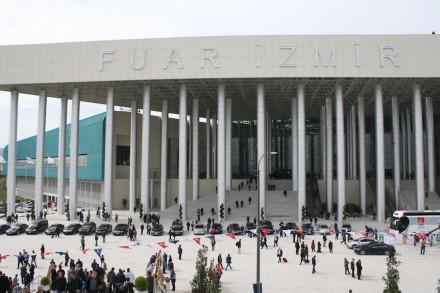 The main entrance can be accessed via a reception foyer lined with stainless steel pillars.

From there an impressive corridor with tall stainless steel pillars on either side, and travertine-clad walls (see photo above) leads visitors down to the Fair. 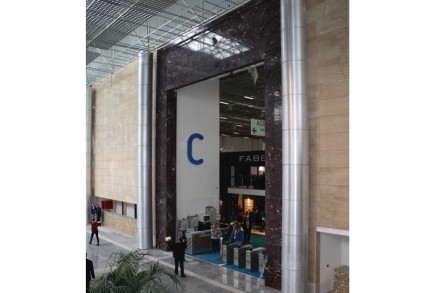 The corridor gives way to the halls through a massive dark marble portal. 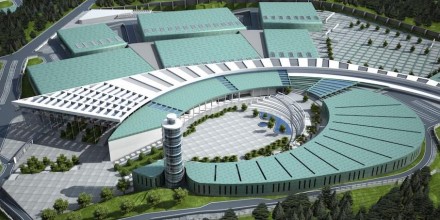 At the center of the Fair Grounds, an amphitheater snuggly recessed into one of the terraces offers a semi-circular core for the halls which fan out around it. A 14 story observation tower offers an overview of the area.

It is the declared aim of Izmir’s official representatives to draw trade fairs and congresses to Izmir. To this end 400 million Turkish Lira (US-$ 151 million, 141 million €) went into the project. In a second step, more halls as well as a congress center, a hotel and a monorail station are to be built, at the end of which some 1 billion Turkish Lira will have been spent on the project.

The halls alone will take up some 90,000 m², no comparison to the crowded proportions at the Kürtürpark.

The 21st Marble Trade Fair showed considerable growth: some 31% more exhibitors attended this years’ fair compared to 2014 – 1562 in total, of which 373 were from abroad and represented some 27 countries.

Facts and figures were provided by Marble Trend Trade Magazine. At the end of the Fair, contact to the Fair Organization abruptly broke off.
We show photos of some of the stands.