German Natural Stone Award: total purse of 30,000 € for projects from across Europe 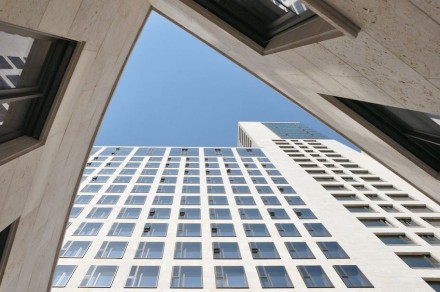 At this year’s Stone+tec trade fair (Mai 13th to 16th, 2015) the Natural Stone Trade Organization Deutsche Naturwerkstein-Verband (DNV) and the Architects’ Professional Organization again jointly sponsored the German Natural Stone Award. A total of 73 submissions took part in the competition. From these the jury chose prize winners in 4 categories. Projects from across Europe were eligible provided the stone originated from Europe. The total purse amounted to 30,000 € of which 15,000 € were ear-marked for the first prize, the Deutscher Naturstein-Preis, and the other 15,000 € for award-winners of the three remaining categories who took home 5,000 € each.

A pdf shows the 15 finalists. The fact that nearly all of the shortlisted projects from German participants were built with natural stone provided by Hofmann Naturstein Company shows the importance of this prime player on the local market. 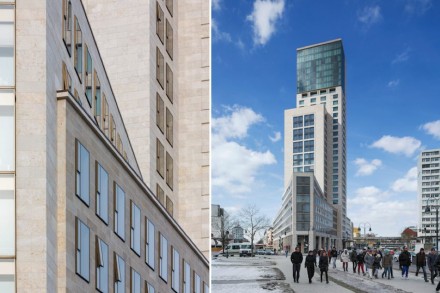 First prize was awarded to Christoph Mäckler Architects for their realization of the Waldorf Astoria Hotel near Berlin’s Zoologischer Garten Station. For the façade German Trosselfels limestone was used. Whereas the sky-scraper section is clad in sleek surfaced stone, the edges of the surrounding blocks carry horizontal grooves.

The jury wrote: „The building dubbed Zoofenster (window to the zoo) … is the realization of a city complex on an insular site which will set a mark for years to come … The composition of elements in various heights and with carefully conceived horizontal projection reflects the outline of the plot with great sensitivity.“ 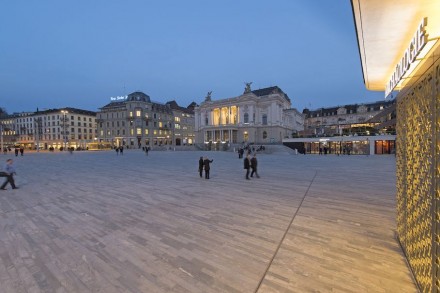 A project from Switzerland was awarded first prize in category landscaping and recreational space design for its redesigned Sechseläutenplatz in Zurich. Vetschpartner Landscaping Architects took home 5,000 €. The area was hitherto a desolate wasteland car parking space. The jury wrote „a clean-cut ‚natural stone parquet‘ make of massif quartzite blocks interspersed with perfectly worked ‚inlay‘ like play of water and ‚groves‘ give the urban area a new identity.“
The Valser Quarzite was implemented, provided by Truffer Company. 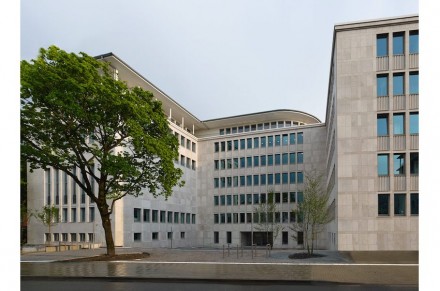 In the category massive building Thomas Müller Ivan Reimann Architects took first prize for the Bielefeld Service Center. The jury’s comment: „The building lends the impression of a group of similar houses, communicating with one another yet with a collective identity. Old and new can be distinguished only on second glance in part because they both are clad in the same Jura Limestone.“

Stonemasonry was realized by Lauster Steinbau. 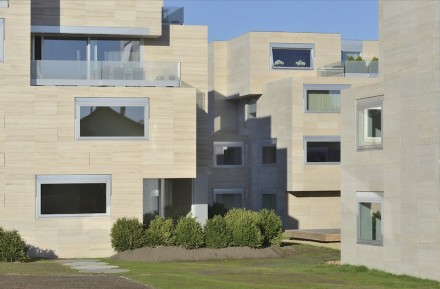 Yet another distinction went to a Swiss complex in the category single and multiple dwellings. Luscher Architects were awarded the prize for their Grand-Pré complex in Crans-près-Céligny where a town square was developed by increased density. The jury: „Rich yet homogenously materialized façades lend a lasting impression of fabric woven from buildings, semi-open spaces and public places … the individual houses with their protrusions create varying volume and density and create private and hidden retreats such as balconies and loggia of particularly high quality.