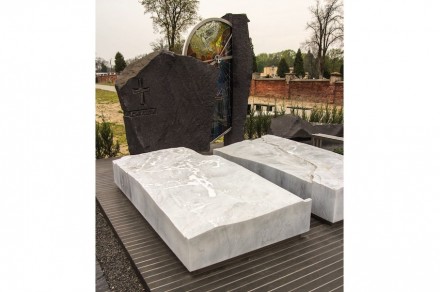 Polish citizens continue to spend a great deal on graves for their loved-ones, in contrast to those of most other European countries. Therefore, Świat Kamienia Natural Stone Prize awarded as every year at the Poznań Stone Fair (Nov. 18th to 21st 2015) has the category Gravestones.

This year’s award went to a gravestone in the city of Łódź, which the jury found to be a modern-day variation on the family plot (see above): instead of the usual tiny chapel, massive stone slabs in Swedish Granite were set upright. Massive as well are the Bardiglio Marble blocks are reminiscent of caskets resting on antiquated Belfast Black Gabbro. The design is the work of Pracownia Rzeźbiarska Andrzeja Weremczuka. 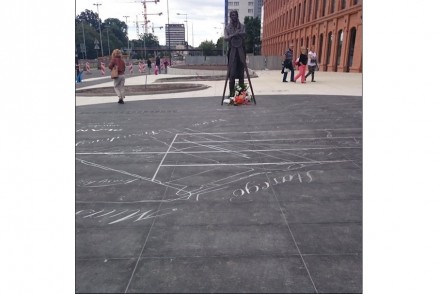 In the category Architecture the special prize went to an historical map of Łódź’ at 5th Politechniki Street for which 5cm-thick slabs of granite Nero Zimbabwe with stainless steel inlay were used. The work was realized by Labradoryt Zakład Obróbki Kamienia Ludosław Wenerski. Draft by Agnieszka Staszczyszyn (Group-Arch). 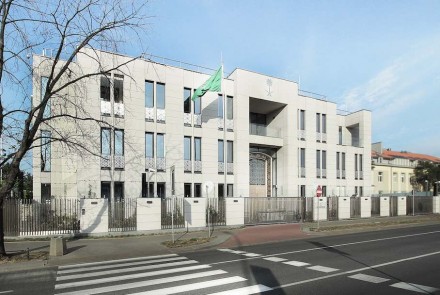 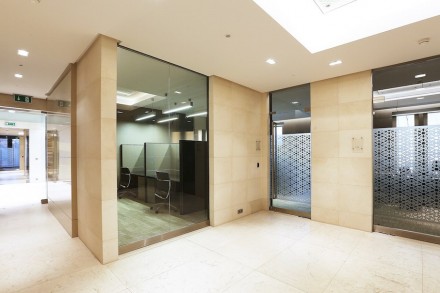 One of the special prizes was awarded for architecture of the Saudi Arabian Embassy in Warsaw and the ambassador’s Residence. Our photo shows the Broniów Sandstone on the façade. The interior is clad in Spanish Crema Ole Limestone. The balconies on the interior, of which we have no photo, are clad in onyx. The work was realized by Przedsiębiorstwo Budowlane i Usług Technicznych Company, Granite after a XY Studio-draft. 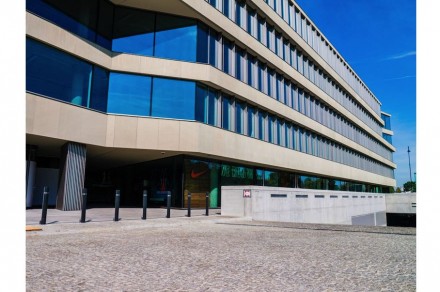 The jury awarded another main prize for the office complex façade of the Wilanów Office Complex in Warsaw. Here undulated and polished slabs of Polish Brenna Sandstone were implemented. The stone work was realized by Kamieniarz Tadeusz Modliński Company. Draft by Jems Architekci. 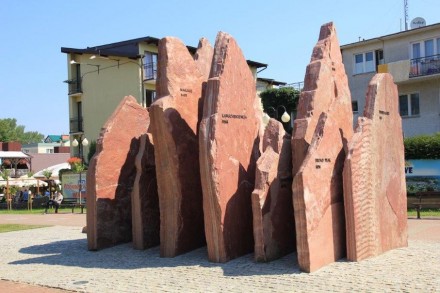 In the category stone sculptures the special prize went to die „Crown of the Himalaya” by Murkam Usługi Kamieniarsko-Budowlane’s Leon Czerwiński. The sculpture standing in the city of Władysławowo stylizes the 14 peaks of the mountain range and the Hindu Kush Karakorum. The sculpture is made of Swedish Wasa Quartz in 2.5 m-high slabs. The sculptors were Professor Sławoj Ostrowski, and Marzena and Jacek Bruzdowicz. 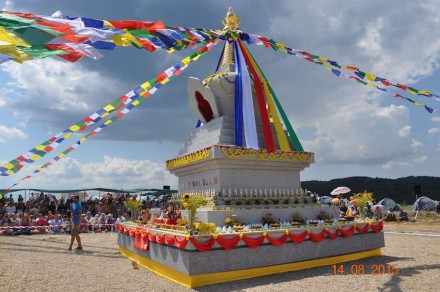 A Buddhist Stupa-Temple in Bulgaria was endowed with one of the main prizes in its category for which Piramida Company used some 94 t of Strzegom Granite. 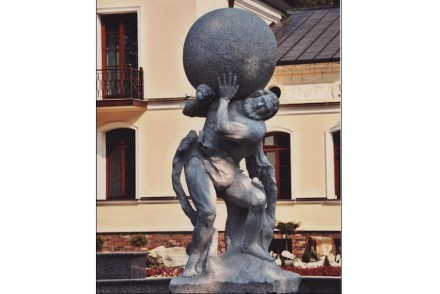 Another main prize was awarded for „Hercules Gostyniński”, on show in Osiny in the vicinity of Gostynin. 10 t of granite were invested. Draft by Tadeusz Biniewicz who realized the work together with Marcin Majchrzak.

The Fair welcomed some 136 exhibitors and 5,000 visitors, most of which originated from Eastern Europe, i.e. the Baltic States, Czech Republic, the Ukraine, Russia and Slovenia. Many guests originated from Germany, Italy but also from India, Brazil, Canada and the U.S.A…
The program encompassed a sand-blasting contest tendered by Świat Kamienia Trade Magazine and Abra Company. For the first time the prize went to a female contestant, Danuta Flis of Awip Company.

Trade Magazine Nowy Kamieniarz had invited students of the Design Polytechnical Schools of Higher Education. Prototypes of selected works are to be shown at the Arena Design Fair (March 8th to 11th 2016) in Poznań. Talks were held by designer Jarosław Koska, a winner of the competition himself, Stone-Ideas.com’s Peter Becker and author Sławomir Mazurek.