Amsterdam’s Rokin Plaza: a façade half aluminum, half natural stone 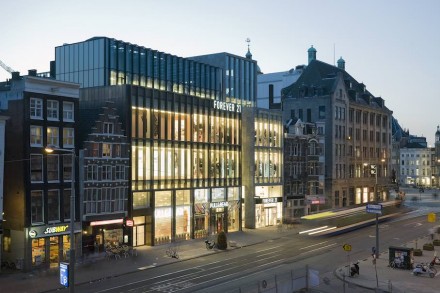 Vertical lines determine the façade of the new commercial complex by the name of Rokin Plaza in the Center of Amsterdam’s historic city center. Blatantly manifest, the two sections of the building are distinguishable by the used of materials, i.e. antiquated limestone.

Let us take a look back at Amsterdam’s building history to better understand ZZDP Architect’s ideas.

Narrow houses with high façades are the traditional method of construction in the Grachtenstadt, the reason being that property tax was levied according to the length of the houses along the waterfront. 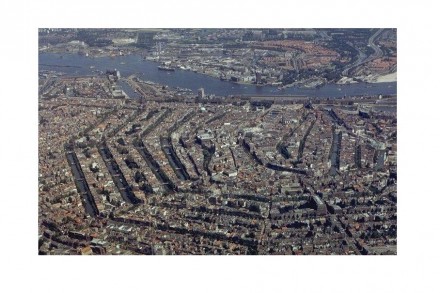 The bird’s-eye view shows the city center with Rokin Plaza somewhere in its middle. 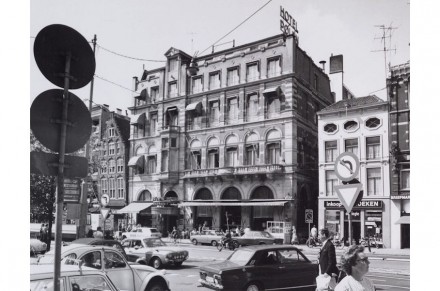 The site used to house a high-class hotel, and, as can be seen on the right in the photo – a narrow building. A passage straight across the property divided the two. 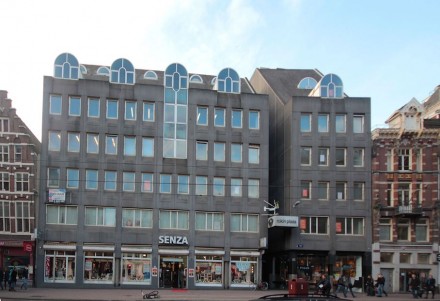 After the hotel was destroyed and reduced to ashes in a 1977 fire, an office complex was erected in the 1980’s binding the two former buildings including the passage to a massive block. The façade was just as crude as the rest of the complex.

No wonder that it was vacant for the longest time.

A new investor began planning in 2010 and solicited Amsterdam’s ZZDP whose architects derived their inspiration from historic construction methods. 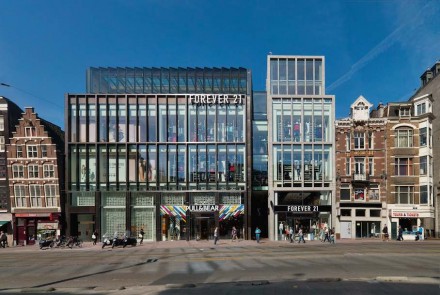 Despite its new height, the building was reduced in size optically by splitting it into two parts. This was achieved by the use of two different types of material on the façade: one side bears bronze siding and the other limestone in brilliant white. The stone has a special surface, more on that later.

The two sections are also distinguishable in the different heights.

New, too: the number of stories – fewer than before allowing the fashion retailers to present their wares in rooms with high ceilings.

The top floors are reserved for penthouse-style offices. 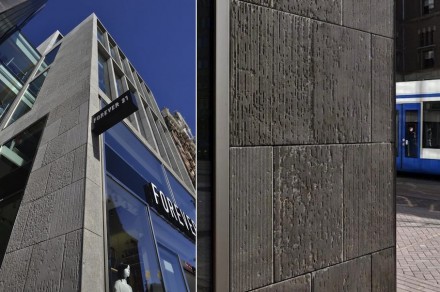 Whereas the bronze façade has a very modern appearance, the adjacent building with its classic limestone cladding has an almost antiquated appearance: Kohlplatter Muschelkalk applied by Traco Company of Germany seems to give the building an air of eons past. 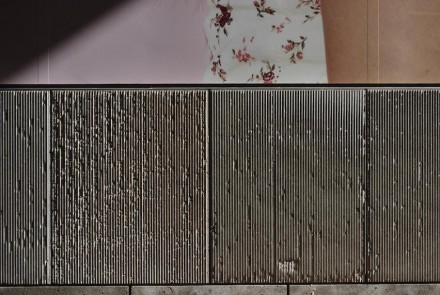 To enhance the effect ridges were worked into the stone by machine. Stone masons then chipped away some of the ridges by hand.

Application of the stone slabs to the façade was provided by Dekker Natuursteen of the Netherlands.

And last but not least: whereas Amsterdam’s heritage buildings usually have jutting top stories, Rokin-Plaza has recessed top floors. 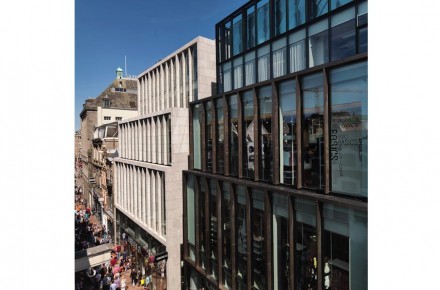 One final word: the façade of Rokin 12 is repeated across the plot in Kalverstraat 11. 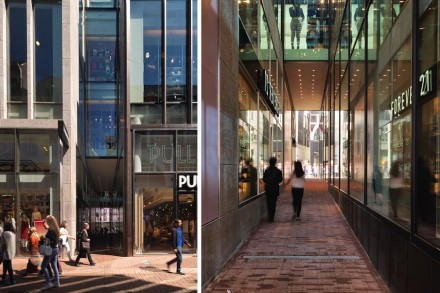 The interior of the passage reflects the appearance of the façades outside the buildings.