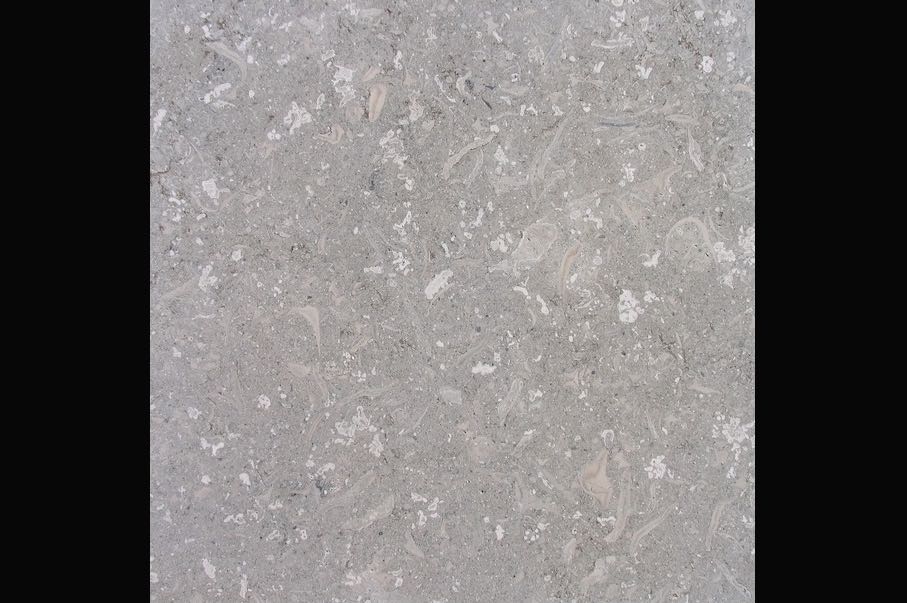 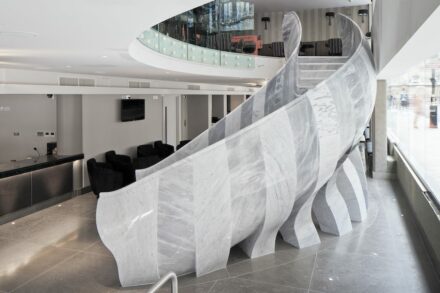 (November 2012) We dare to claim that the staircase is unique: London’s new St. James Theatre bridges the gap between the ground floor and the first floor restaurant with a grand Carrara Marble swung staircase.

25 tons of white and blueish Carrara natural stone went into Mark Humphrey’s construction by the title „Final encore“. He was inspired by the curtain calls of actors at the theatre: as they join hands to take a bow, so, too, do the elements of the staircase join together in alternating colors. 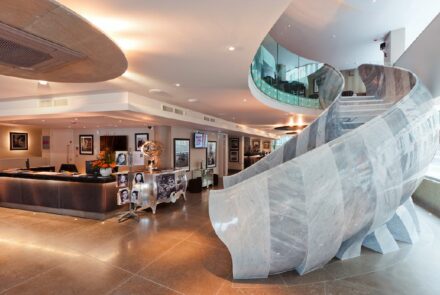 The white elements carry the weight of the stairs, the bluish ones are affixed with the help of special adhesive and metal joints.

The staircase is overwhelming not only because of the magnificence of the material used. 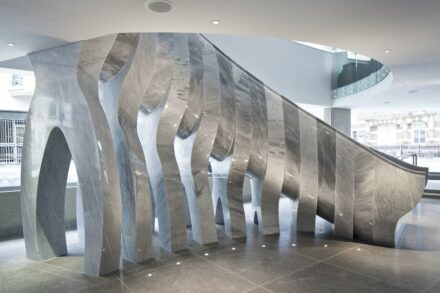 The shape of the staircase is reminiscent of a fairytale monster: a giant centipede or dragon. 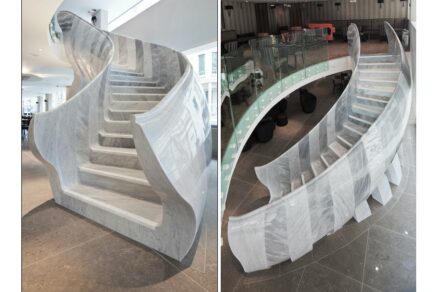 But the monster is tame: the theatre guest can walk right down its middle and let his hand glide over the smooth stone surface.

But we digress. The reason for the work of art is profane: The theatre receives no subsidies. This fact can only partially be compensated by high booking frequency. „Every part of the building … must contribute to the success“ according to a press release.

Until 2002, London’s Victoria district, specifically 12 Palace Street, is home to the Westminster Theatre. The area was never popular as a theatre center as London’s West End is traditionally the entertainment area.

But aficionados already see Victoria as the new Theatre Off-Scene with small theatres similar to the Off Broadway scene in New York City. 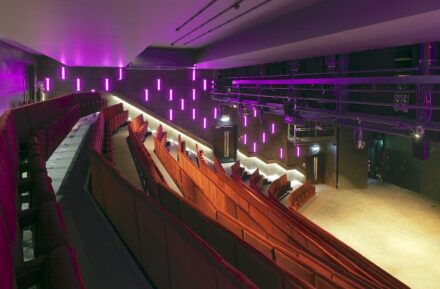 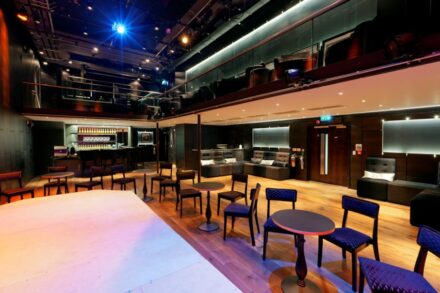 … the studio another 100 and is particularly suitable for regular jazz, comedy or cabaret performances.

The overall concept is complemented by a café open all day as well as a restaurant. Facilities can be reserved for events by private users or companies.

Visitors would enjoy the swung staircase on top as a special attraction. Mark Humphrey, self-declared „artist of design“ hopes that visitors will use the staircase, stroll around it, feel the cool smooth stone, and take numerous pictures, he says in a video. „When that happens it (the work) must be good.“ 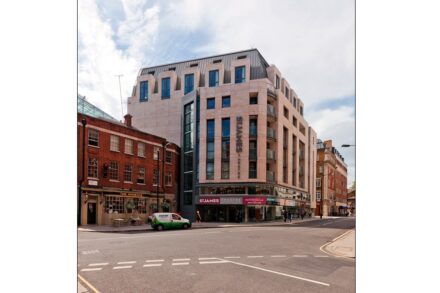 10 raw blocks of marble with a total mass of over 200 t were imported from the mountains of Pietrasanta for „Final encore“. 15 stonemasons worked a total of 4,000 hours to complete the piece. Porcelli Marmi Company realized the project. Mark Humphrey gave the reason for his choice of producing company which does not even have its own webpage: „only to work with the very best master craftsmen and stone masons“. 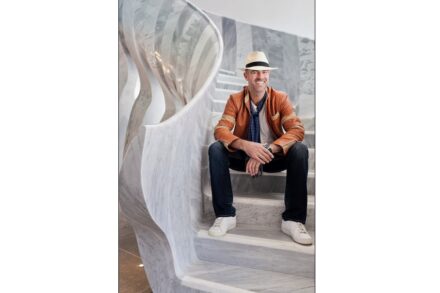 Portland Limestone was used for the façade. Other types used on the interior are Nova Blue limestone and Pietra Serena Sandstone.

Architecture for the theatre was by Foster Wilson Architects. The façade and the apartment house above are by Loates-Taylor Shannon Architects.

Costs for the project will total some 7 million Pounds Sterling.