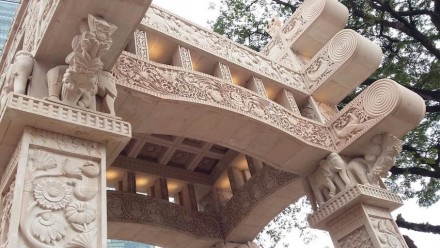 Odyssey Company created a rich décor in flora and fauna 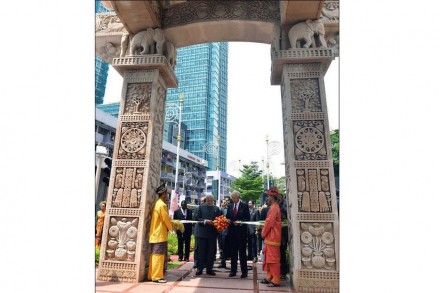 The aim was to demonstrate and promote closeness and understanding according to official press releases. Such Gates are important symbols of both Buddhism and Hinduism. They separate the worldly from the religious in Temples like Sanchi’s Great Stupa. They usually comprise a two-column construction bridged by a horizontal architrave across.

In the case of the Brickfields Gate, architects of New Delhi’s Akshay Jain and Associates doubled the classic form. The décor reveals e.g. a Bodhi tree at the foot of which Siddhartha Gautama is said to have experienced his enlightenment, lotus flowers as a symbol of purity or scenes from the Jakata-Legends. 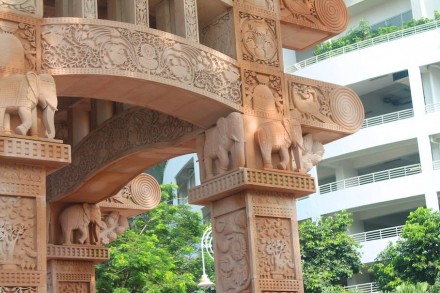 48 t of Beige Dholpur Sandstone were implemented by Odyssey Company of Noida, Uttar Pradesh. The design specialist won the competition over 16 co-contestants.
The décor was carved into stone slabs of 7.5 cm thickness or more in a mere 4 months. Odyssey Company completed the job with the help of traditional handy craft as well as the use of CNC-machines and water-jet technology as Ruchika Grover, founder of the Company and expert in stone design, revealed. 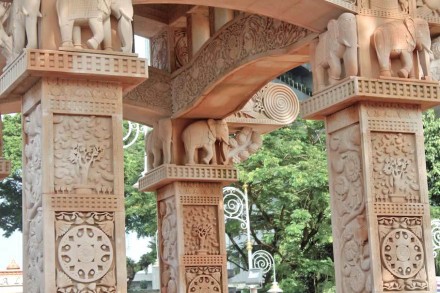 The Torana-Gate with costs of 1.1 million US-$ was a politically sensitive project to realize, as can be read between the lines of the international press: There was heated debate over the décor as well as participation of Malaysian companies (or the lack thereof). It took five years to reach a compromise.

Brickfields is dubbed Little India and comprises many Indian shops as well as a „vibrant Indian community“. A significant proportion of Malaysian People have Indian roots: some 2 million of the 30 million-population according to the press. 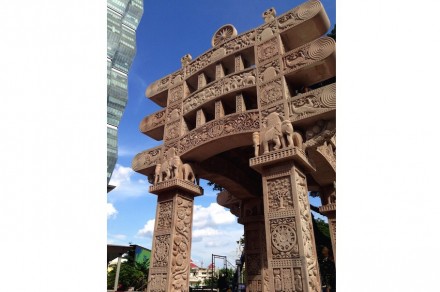