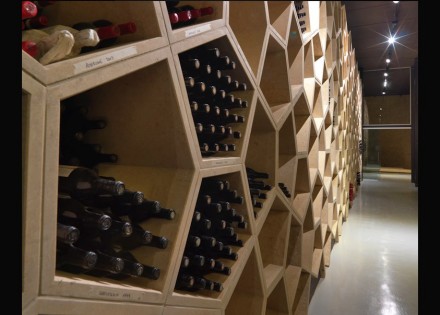 Brandscaping is the architectural buzz-word – a portmanteau comprising „brand“ and „landscaping“ which implies that many landlords want their buildings to express a singular distinguishing factor with the aim, e.g., to attract attention. A successful case in point is San Pietro’s Zýmē Winery in Cariano in close proximity to Lake Garda in Italy’s Valpolicella Valley: It playfully reflects the company logo’s pentagon. Architect Moreno Zurlo of A.c.M.e. Studio associate di Architettura unpretentiously integrates his work into the surroundings and its heritage.

San Pietro was home to an old quarry in which limestone was won for many generations. The stone was not very dense. The pit was open to one side where the entrance to the quarry was situated. 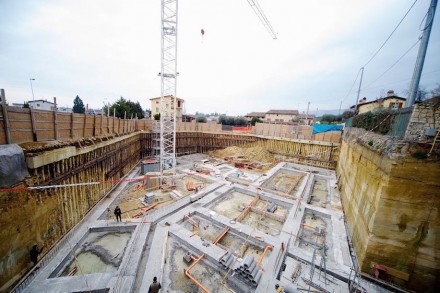 Zýmē Winery, famous for its Amarone-redwine made of partially dried grapes, chose this exact spot for its new building-complex. There were practical reasons behind the chosen venue: temperatures in the vault where the wine is stored, must remain constant. 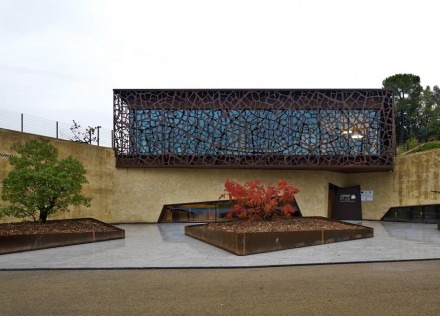 Constant temperatures can best be maintained in caves or artificial burrows. 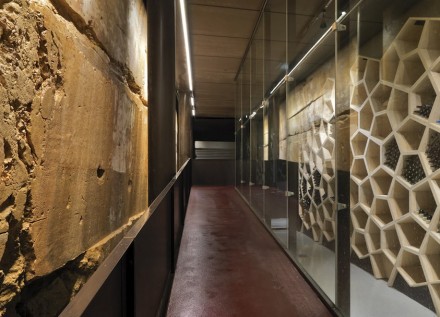 But the implementation of natural stone is quite spectacular as the complex is intrinsically connected to the quarry by the stone itself. In some instances the walls incorporate rough stone as it was quarried.

But a new type of stone was used as well, i.e. Pietra di Vicenza limestone, similar in appearance to the old type but more suitable for the use at hand. Stone was provided by Grassi Pietre Company, based in close proximity. 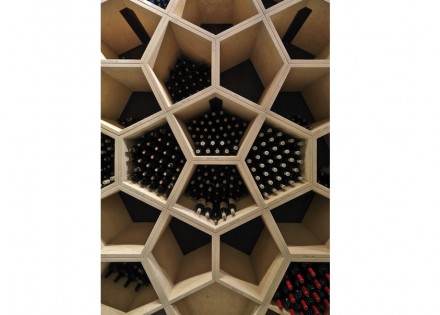 Here, again, the pentagon comes into play. The so-called archive, a storage area for very special wines, was conceived as an entire wall of pentagonal wine shelves, which can be rearranged to a variety of patterns. 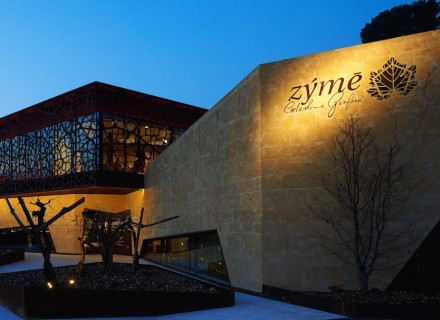 The geometric shape refers to Zýmē’s company logo, which, in turn, represents a stylized wine leaf, as shown on the photo. 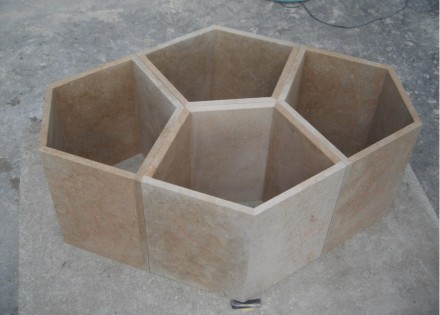 The shapes remain in place by gravity and a little help from an adhesive. A steel bracket affixes the elements to the wall for extra stability, e.g. in case of an earth quake. 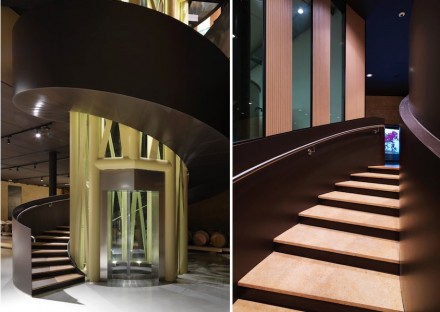 At the center of the building, a stairwell provides access to the other two stories. The steps are clad in Giallo Dorato, a type of Pietra di Vicenza.

Natural stone can also be found in the kitchen leading to the wine testing area. Here a massive Pietra di Vicenza-sink was installed. Rustic Green Marble welcomes visitors leading up to the main entrance. It, too, was provided by Grassi Pietre Company.

Rooftop greening ensures that the interior remains cool despite the heating sun rays, and the picture window-front is encased in a Corten-Steel stylized grapevine. Electricity is provided with the aid of a photovoltaic converter.

Visitors who are led to the archive after a wine testing are „absolutely fascinated“ by the pentagonal design. The sheer dimension is almost breath-taking what with 16.9 m length and 5 m height. Each pentagon measures 78 x 56 x 60 cm and weighs some 85 kg. 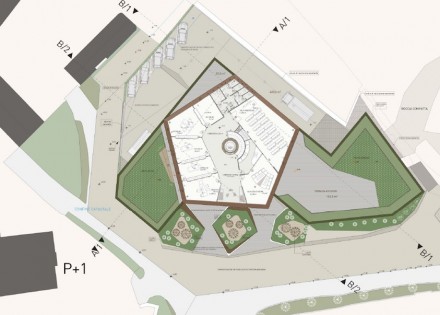 The complex itself is pentagonal in shape.

The Project was awarded one of the Pinnacle Awards of the Marble Institute of America (MIA) 2015. 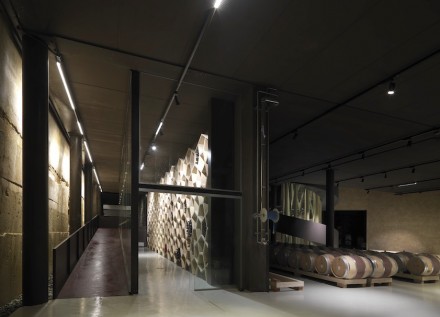 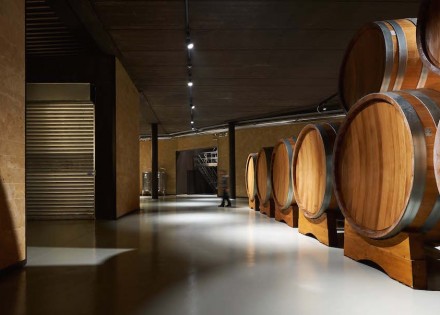 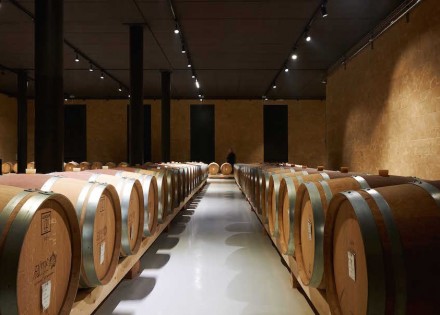 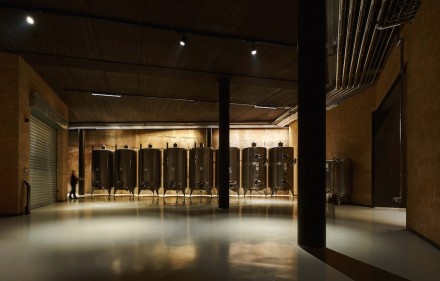 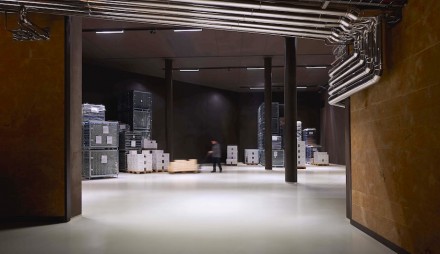 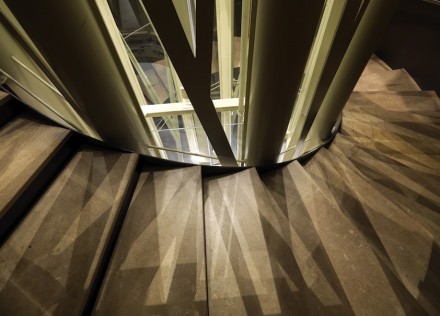 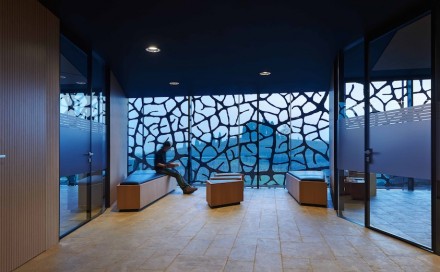