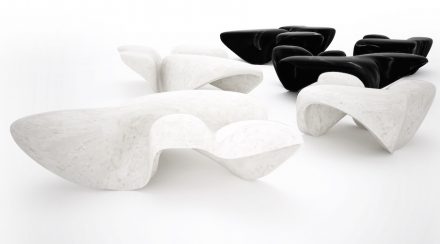 Three Mercuric Tables from Citco’s Zaha Hadid Collection were donated to an auction for the new building of the London Design Museum and raised over £1,160,000 together with other spectacular examples of contemporary design. „The Time for Design Auction“ was held as live sale on April 28, 2016 followed by an online auction continued until May 2.

Recently deceased Zaha Hadid had created the pieces in 2013 for Italian stone company Citco based in Verona.

In a report in Stone-Ideas.com, the low tables made of Covelano Bianco marble had been compared to Mercury’s typically rounded and drops-like forms. Citco wrote in a press release: „The tables are objects with an organic form that seem to have been shaped in clay, sinuous and polished like stones in rivers or on the seashore.“

The company had provided the Zaha Hadid Foundation with the pieces which had then been donated to the auction.

The new Design Museum, slated to open to the public on 24 November 2016, will be located in the former Commonwealth Institute building on Kensington High Street. It will have three times the space of the present venue, and will include an education center, an auditorium and a large gallery for the permanent collection, an international showcase of great design masterworks.