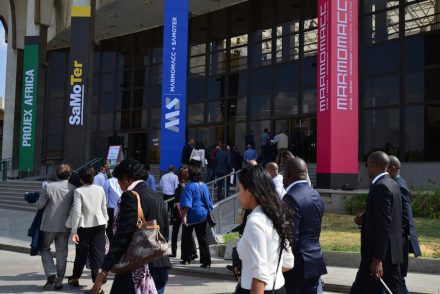 The Egyptian marble, granite and alabaster sector by now ranks eighth in the world, with exports of stone materials up by 490% in quantity over the last eight years. Despite the slight downturn in 2015 (-3% for exports) following the drop in demand from China, the sector is likely to grow by 15% over the next four years, with production increasing by 2020 to 650,000 tons. This emerges from the „Marble and Stones in Egypt“ Report which was be presented in Cairo during the third edition of MS Marmomacc + Samoter Africa alongside the second edition of Projex Africa, the two events dedicated to natural stone, earth moving machinery and sustainable construction scheduled in Egypt’s capital December 10-13, 2016.

The event counted over 100 exhibitors from Egypt, Italy, China, Brazil, Bulgaria, United Arab Emirates, Germany and Turkey, three halls and a show area of 6000 square meters. Its role was emphasized by the presence at the inauguration of Tarek Kabir, the Egyptian Minister for Trade and Industry.

Italy is one of Egypt’s main trading partners, especially in the natural stone sector where it is the second largest supplier of stone processing machinery and technology with 2.4 million euros of trade in 2015 and the sixth largest importer of unhewn blocks of Egyptian marble, worth 1.5 million euros.

Italian Trade Agency ICE, in collaboration with Veronafiere, had selected qualified buyers to take part in b2b meetings during the two shows in Cairo.

Giovanni Mantovani, CEO of Veronafiere and member of the Italian-Egyptian Business Council, said: „Within the scope of our exhibition activities on consolidated and emerging markets around the world, North Africa is an area where we have invested in construction agro-food sectors for some time. In addition to Egypt, we are also active in Morocco with the Medinit Expo and Medinit Agro events, and Ethiopia, where this year saw the debut of Building East Africa.”

For the first time, during MS Marmomacc + Samoter Africa, was held the Egyptian Stone Summit organized by Veronafiere to analyze the state of the art and likely development of the local natural stone industry. This year also welcomed the debut of the Stones of Africa Gallery, an exhibition of marble, granite and natural stone materials.

Projex Africa, on the other hand, was home to the international Middle East Buildings & Façades Summit, with a focus on green building techniques and the latest findings in the field of materials, facades, fixtures and renewable energy.