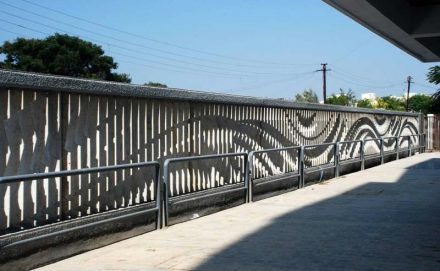 Stonemart India Trade Fair, held in Jaipur in the State of Rajasthan (Feb 2nd to 05th 2017) was overshadowed by the „Goods and Services Tax“ (GST). With it, India’s taxation system will be changed completely, in part simplifying and stream-lining the taxation system.

Among the representatives of the natural stone branch hardly anyone was completely against the new law. But officials warned politicians in no uncertain terms not to classify marble, granite and the like as luxury goods which would imply a leap from 5% to more than 20% tax.

Officials hope to convince Rajasthan’s politicians to classify producers of natural stone as an industry and to establish an Export Promotion Council to assist sales abroad, according to Shri Ashok Dhoot, Vice Chairman of the Center for Development of Stones (CDOS).

Rajasthan’s Minister of Industry, Raipal Singh Shekhawat, opened on a friendly note: „I appeal to my architect friends to use more of this magic material – stones — as they whisper, they echo and they also have a soul”.
A similar scenario played at the Architecture Festival, held for the second time and lasting three days. The central idea of the talks and discussions was to give natural stone a role in the Government’s „100 Smart Cities“ initiative putting forth natural stone’s high sustainability and longevity.

The fact that stone buildings can get along without air conditioning without compromising comfort is an effective argument.

The sustainability tune was also sung by producers of engineered stone. Many of them pointed out that recycled waste from stone production is the main ingredient of their product.

As always, the Fair served to announce the winners of the die „All India Stone Architecture Awards“ (AISAA). The ceremony took place at the Shilpgram-Pavillion where 30 artists and craftsmen presented their work.

Stonemart India is held biannually by the center for Development of Stones (CDOS) in cooperation with the Federation of Indian Chambers of Commerce and Industry (FICCI). The main sponsor is the Rajasthan State Industrial Development & Investment Corporation Ltd (RIICO). A total of 460 exhibitors welcomed some 25,000 visitors, 15,000 of which were of the trade. 1,200 foreign guests originated from 60 different countries.

Another important Trade Fair takes place in India’s city of Bangalore. It takes place annually and is organized by the Federation of Indian Granite and Stone Industry (FIGSI). (MdOS)