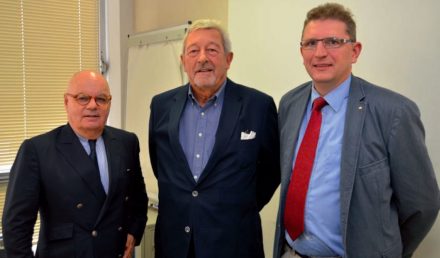 Pierre Brousse is the new president of French SNROC (Syndicat National des Industries de Roches Ornementales et de Construction), the country’s natural stone association. He was elected for the period of 2016-2019 at the organization’s general assembly in Paris.

Pierre Brousse is the owner of Rocamat company, which had a turnover of nearly 35 million € in 2016.

He started his professional career in 1975 as officer in the French Navy. He then served as civil servant in Strasbourg and in the Department of Industry in Paris.

Since 1986, he played important roles in companies of the construction and financial sector like Ciments Français Group, Financiera y Minera Group (Madrid) or Belmert Capital, just to name a few. As entrepreneur, he was one of the founders of Consolis Group, a specialist for precast concrete. Since 2016 he has been chairman of Rocamat.

He became Rocamat’s shareholder in 2015 following an old relation with the former owner of the company M. François d’Epenoux.

Rocamat is one of France’s oldest stone companies. It was established in 1853 under the name of Civet Fils et Cie. After several renamings and acquisitions of producers of limestones and granites during almost 100 years, it became Rocamat in 1971. On its webpage, it describes itself as „a major player in international construction stone production, and the leading producer of natural stone in France“.

The group operates 30 quarries in France, 5 processing plants and has a staff of 290 employees.

Rocamat has supplied stones for prestigious projects in France like Musée d’Orsay, Grand Louvre, Tour Eiffel or recently Foundation Vuitton or Orthodox Cathedral. It also supplied stones for famous buildings worldwide as in the US Stanford University or Metropolitan Museum of New York.
On its webpage in French, English and Chinese environmental concerns and social responsibility are given great importance.