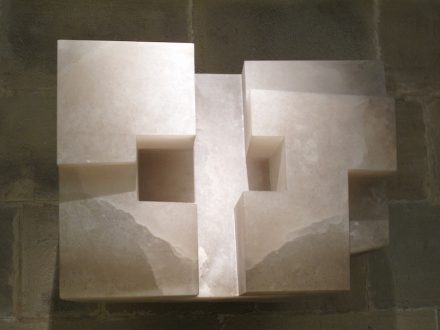 Sculptures made in marble, Alabaster and other materials by significant 20th century artists

The exhibition „Monochrome“, an exploration of the use of a single color – white – and focusing on sculptures by a number of significant 20th century artists, will be open at Ordovas gallery, London, until 22 April 2017.

White was long associated with purity and clarity, and in Moby Dick Herman Melville reflected if it was a color at all: „In essence, whiteness is not so much a color as the visible absence of color, and at the same time the concrete of all colors”.

The exhibition presents works rendered in various tones of white by Eduardo Chillida, Alberto Giacometti, Barbara Hepworth, Isamu Noguchi and Richard Serra. For some of them marble was the right material, for others Alabaster.

In Christian mythology, Alabaster stood for the purity of the sky and the paradise. The soft stone became the material for sculptures of angels.

He had made his first work in alabaster in 1962 following a trip to Greece. There he had been inspired by architecture and light, and saw alabaster as a material for constructing space – enabling him to show the flow between interior and exterior and the communication between light and the material.

Gurutz, meaning „Cross“ in Basque, was one of approximately 50 alabaster works that Chillida created, and he continued working with this transformative material until his death in 2002.