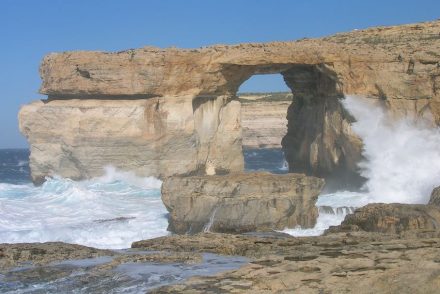 The famous „Azure Window“ on the Mediterranean island of Gozo has been destroyed in a storm on March 08, 2017. The limestone formation on the sister island of Malta as well as Gozo’s complete steep coast were the reminders of a natural bridge between Europe and Africa which broke at the end of the ice age around 13,000 years ago.

Dinosaur footprints have been found in the Purbeck Limestone quarry of Haysom company in Dorsett, UK, Stone Specialist magazine reports.

Two stone-clad rooms and two rooms clad in wood can be booked in the „House of Architects“, a newly erected building next to „7132 Hotel“ in the Swiss city of Vals. The stone rooms are clad in Swiss granite as was used in Peter Zumthor’s thermal baths. The building will be open to the public from July 8th 2017 on.

Photos of a quarry in Tuscany as documented by Virginie Khateeb in her series „Deconstruction“.

The Bursa Block Marble Fair (November 2nd to 5th 2016) has developed well in its second edition according to the Turkish Trade Magazine Marble Trend (Nr 39). The Fair counted 201 exhibitors and some 20,000 visitors from a total of 41 countries. 1080 raw blocks were on show weighing in at a total of 26,000 t. Both exhibitors and visitors increased in number by 30% relative to the previous year’s show. The number of raw blocks was nearly double the number shown last year.

At Salone del Mobile 2016 Engineered stone producer Caesarstone had presented „A Material Menu: Designs for the Culinary Aesthetic“, a conceptual cookbook with recipes by food design studio Arabeschi. The ideas have now been published for download (1, 2). 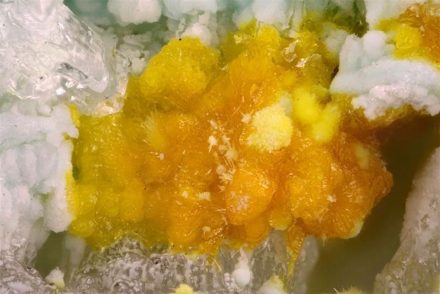 Leesite, Leószilárdite and Redcanyonite are three new uranyl minerals discovered growing on the walls of old uranium mines in southern Utah. An alumnus of Michigan Technological University discovered them. Though small and barely visible to the naked eye, Leesite occurs in bright yellow aggregates of stacked blades or radiating needles up to one millimeter in length.

An American student got stuck in a giant stone vagina in front of Tübingen university’s Institute of Microbiology and Virology. The young man hat tried to climb the sculpture by Peruan artist Fernando de la Jara, but somehow failed and finally had to be freed by German firefighters. According to the artist, the artwork made of 32 t of red marble from Verona measuring 4.2 x 1.7 x 1.7 m symbolizes the „Gateway to the World”.

26,000 historic photographs of buildings erected with Indiana Limestone were recently discovered in a dilapidated building in Oolitic, Indiana. The Indiana Geological Survey rescued them and is slowly cleaning and scanning the photos, with over 4,000 already scanned onto the IGS website. Funding for these documents of Building the US-nation is seeked.

Marble was the material of choice for the table „Palette“ by Spanish designer Jaime Haion.
http://www.andtradition.com/the-collection/10-tables/1843-palette-table-jh8/

The city of Barcelona has made a call for the refurbishment of the Rambla boulevard.

The French National Assembly has adopted a corporate „duty of vigilance” or „duty of care” law („Devoir de vigilance des entreprises donneuses d’ordre”) which makes it compulsory for large French companies to control labour laws and environmental issues at their suppliers outside the country. The law is similar to the UK’s Modern Slavery Act but will probably affect less importing companies (1, 2).

Video of the month: not for the weak of body – how to lift heavy stones properly. Note the stones are not lifted per se but rolled upward from the chest!