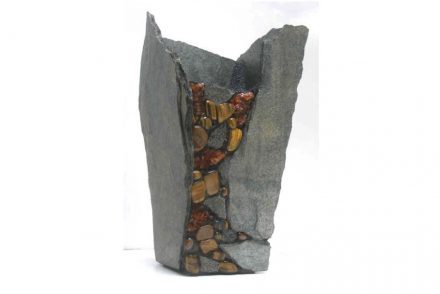 „Vaseguy“ (pun intended!) is the nickname a Canadian artist was given by visitors to a local West Coast handicrafts market where he was selling his natural stone vases, all rectangular and decorated with semi-precious stone or pebbles. By and by he began distributing his wares via his website.

The online website of Al Arabiya’s TV channel reports on Istanbul’s Sancaklar Mosque as a new building type for houses of Islamic worship. The building by Turkish architect Emre Amrolat, part of which is built subterraneous, had won a prize of the International Awards Architecture in Stone at Marmomacc 2015 (1, 2).

A „petrified forest“ is open to the public near Bulgaria’s city of Varna.

The purported drawbacks of natural stone cobble stone vs. compressed concrete can be compared on a webpage.

Lapicida, British specialist for exclusive design made with natural stone, has integrated an online-shop in its webpage.

Ten different textures and colors from the Supernatural Collection of engigineered stone Caesarstone are used in a coffee table by Isreaeli Design studio Dor Carmon. The piece was shown at the Fresh Paint contemporary art fair in Tel Aviv 2017.

Unusual natural stone structures were discovered according to the Siberian Times.

A „dry-wall school“ has been called to life by the Accademia della Montanha del Trentino where courses are offered and graduation certificates distributed to those who pass the course on erecting and maintaining a solid wall without the help of mortar.

Video of the month: The Fundación Mies van der Rohe is offering a virtual tour through the famous pavilion of the world fair with onyx and travertine walls. (sumu)