Izmir Marble Trade Fair: Update for the natural stone branch at the center of „Sector Talks“ 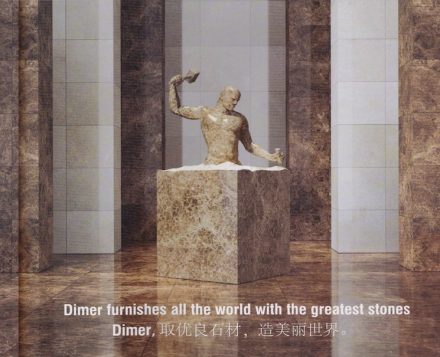 For the first time, IZFAS Trade Fair Organizers held a convention for exhibitors and visitors

Izmir Marble Trade Fair (March 22nd – 25th 2017) held a convention for the first time. The title „Sector Sessions“ originally chosen was somewhat confusing and was renamed „Sector Talks“. The aim was to bestow added value for potential buyers and sellers by bringing both together at the Fair and giving both parties food for thought.

The initiative came just in the nick of time: changes in the market are evident world-wide.
Marble, granite and the likes are experiencing a widespread increase in consumer popularity. On the other hand, the net profits for „commodities“ are shrinking continuously due in great part to the overwhelming marketing efforts of ceramic and engineered stone competitors.

Thus all the talks revolved around sales opportunities for natural stone: new markets, new products as well as new and improved standard products were at the center of focus.

The current and common theme was less the making of the Trade Fair Organizers than a long over-due theme weighing heavily on the shoulders of speakers for some years now.

New markets in a wider sense was the theme of Brian Gurteen of the German language Trade Magazine Naturstein: his talk was, albeit, restricted to natural stone markets in Germany. But he pointed out week spots if companies seek to conquer new markets.

Gurteen described the current Bull Market in Germany in terms of natural stone consumption and underscored his discourse with figures on stone sales. As to possibilities for newcomers: the market is difficult, he says. A handful of wholesalers dominate it and some big stonemasonry firms have positioned them to acquire a good share of contracts from architects.
There is also a trend toward local stone in the interest of sustainability and low CO2-foot-printing. He noted that „local“ in this context means anywhere in Europe.

Anil Taneja of the Spanish Trade Magazine Litos analyzed the branch on a world-wide basis and directed his focus on marketing. Marketing in the natural stone branch, according to Taneja, is, despite its crucial importance, „currently practically nil“.

In his view, should be talking about stone not merely as a material but about natural stone as a product trade mark with which customers can identify.

He also uttered a number of unpopular theses:
* it makes no sense to emphasize longevity of construction and materials if the client is thinking short-term;
* architects are seeding „modern materials“. Thus, it is up to the branch to don a modern image;
* the branch must answer to unpopular questions such as child labor simply because „the client wishes it“;
* the branch must master the social media;
* China is no-longer the old entity – today it has a highly developed buyer’s market, seeking high quality and willing to pay the price.

Peter Becker of Stone-Ideas.com presented a similar thesis. The big opportunity for the stone branch lies in product design: household objects made of natural stone not only represent a new segment for the branch; more then this, with such objects the branch can present itself at trade fairs for architects and interior design. In private households, design goods do constantly provide free promotion of the material.

Stephan Heyert of Akemi chemical products also offered an update for stone, albeit from a different direction: „There is too little awareness that natural stone, even though it is a natural product, must be protected“. He showed photos of granite flooring in the Izmir airport terminal, where cleaning water had probably darkened the edges of tiles. „Cases like these give the entire branch a bad image and could be avoided by use of appropriate sealants.“

In his opinion the stone vendors have an obligation to point out solutions to architects and building contractors.

Yet: what if stone, well known as material 100 % natural, is treated with chemicals? Heyert pointed out that Akemi Sealants bear the „foodsafe“ seal of approval.

Unfortunately, there were but 20 visitors. The reasons for poor attendance is manifold:
* to date it was not the norm for representatives of a stand to leave their grounds and listen to a lecture;
* the afternoon of the first day is not the best time to hold a conference;
* the International Stone Convention held simultaneously offered an abundance of lectures and talks;
* the „Sector Talks” venue was difficult to locate.