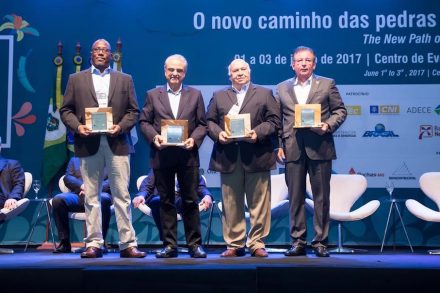 At the Fortaleza Brazil Stone Fair (June 01 – 03, 2017) were honored people important for the development of the country’s stone sector. They were: the Italian Giorgio Veneziani and the Brazilian entrepreneurs Jorge Jordão (Vermont Mineração) and José Fernando Castelo (1st president of Simagran-CE). Also was honored Robson Braga de Andrade, president of the Confederação Nacional da Indústria (CNI) who is an important supporter of the fair. 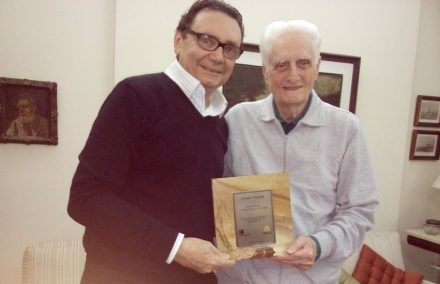 It was in 1948, that the Giorgio Veneziani came from Italy to Brazil to become a technician at the that company Sociedade Marmífera Brasileira (Azul Bahia). Soon the new capital Brasília was to be built and that meant a big step forward for the stone sector. Giorgio Veneziani became the leading coordinator of the stone works. It started with the president’s palace Palácio da Alvorada and was followed by 10 ministries plus the Palácio do Planalto. Later came the building for the Banco do Brasil, it alone with 32,000 m² of marbles and granites.

It is definitely no exaggeration to say that Giorgio Veneziani has become a living legend of Brazil’s stone sector. And it is also worth mentioning that still today with 92 years he works at least 3 days per week at the Sociedade Marmífera Brasileira in Rio de Janeiro.

Jorge Jordão was born in Rio and worked many years in the stone business in Cachoeiro de Itapemirim, a center of stone quarrying and processing in Brazil’s state of Espírito Santo. Attracted by the beauty of the stones from Ceará, he moved north and founded Vermont Mineração in the city of Sobral. The company is specialized in quarrying exótic stones and quartzites and is today the biggest firm in the stone sector in Northern and Northeastern Brazil. At the moment, the company has 10 active quarries in the state of Ceará and 7 in the state of Bahia. One of its best-known stones is the Taj Mahal, a quartzite from Uruoca village, Ceará.

Robson Braga de Andrade comes from São João Del Rey in the state of Minas Gerais and is a mechanical engineer. He’s the 12th president of the Confederação Nacional da Indústria (CNI). Since 30 years he is the leader of the Grupo Orteng which supplies equipment for the sectors of energy, mining, steel telecommunication, transport and others. He is a member of the Conselho de Desenvolvimento Econômico e Social of the country’s President of the Republic and president of the Confederação Empresarial da CPLP (Comunidade dos Países de Língua Portuguesa). In the CNI, he coordinates the mining commission’s decisions to regulate and improve the sector.

From 1993 to 1997, José Fernando Castelo Branco Ponte was the first president of Simagran-CE which is Ceará’s natural stone association. The positive aftermath of his important work can still be felt today. One of his initiatives was the participation in an international event in Japan. Also in Italy and all over Europe, his endeavor was to open up new markets for the stone sector.