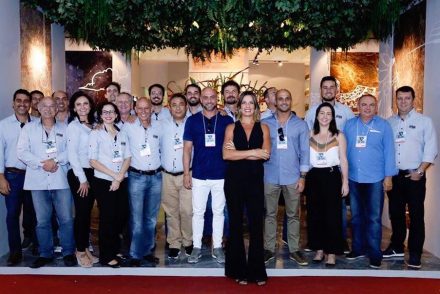 Corcovado Brasigran Group’s marketing director started her career in journalism, then changed into fashion and has now a passion for natural stone

If a young lady has a passion for fashion this is normal, but if that girl as grown up develops the same passion for natural stone it is quite unusual. Renata Malenza, marketing director of Brazilian stone producer Corcovado Brasigran Group, is that person. At this year’s Vitória Stone Fair (June 06 – 09, 2017) she was awarded the first Marmo+Mac Latin America Award for the company’s contribution to the development of the stone sector.

The prize was presented by Fernando Coelho Filho, Brazil’s minister of mines and energy. 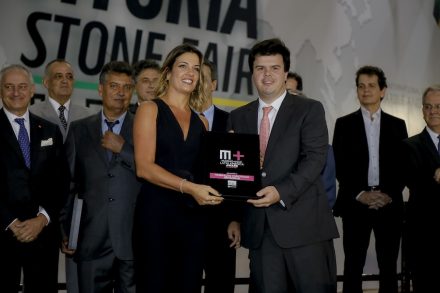 Just to mention two of her bigger business successes: Brasigran provided 300.000 m² of yellow Itaúnas granite for the airport of Dubai. The same stone originating from the company’s own quarries was used in the Shopping Iran Mall in Tehran, the major shopping center in that country. Renata’s own comments about these projects are cool and sober: „The commissioners choose us because we are able to manage mega projects.“

But passion, as said above, is another side of her character.

Her marketing ideas always go behind stone as a construction and design material. „American Natives“ collection, launched at the fair, comes with eight new quartzite colors that bear the name of the main native groups that inhabited the US. Its highlights are the stones’ strong and earthy colors.

As marketing ideas on occasion of the last years’ Vitória Stone Fairs, she had invited artists to realize projects with the company’s stones. The money from auctioning the pieces went to social projects in Espírito Santo.

Just to mention two of the projects: in 2012 in „Collezione Splendore“, 6 jewelry designers from Espírito Santo were invited to create exclusives pieces using Brasigran´s exotic granites, and in 2016 in „Pedra Cobre Pedra“ Syrian rooted artist Hilal Sami Hilal made books of stone with copper. 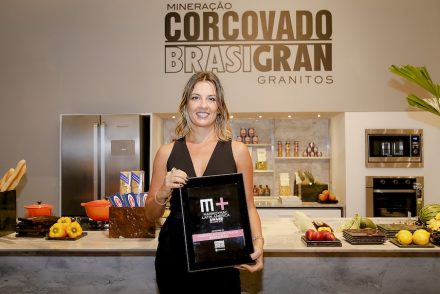 This year’s idea for the stand at Vitória Stone Fair was a modern Brazilian cuisine. A personal organizer cooked there and gave cleaning tips.

Renata Malenza studied journalism at the FAESA university and fashion at the Faculdade Santa Marcelina (FASM) in São Paulo. Her professional career started as director of RM produções making films about weddings, children’s birthday parties etc. The next step was JX Plural, another film company where she was a producer.

Before she went to São Paulo, she worked with Mineração Corcovado, the mother company of Corcovado Brasigran Group but in 2003 she moved from São Paulo to Vitória and the call for the stone industry came.

She has been serving Corcovado Brasigran Group as marketing director for a good 23 years.