The so-called future „concept-event“ shall create value-added with „Marmotec_Hub_4.0“ and „White Carrara Downtown“ as parts

After some months with discussions, if old Carrara Marmotec will be shut down, the fair is back with an event on June 04 – 06, 2018. It will be a „new concept-event“ of which the video on the webpage gives a glimpse: „I am Carrara, daughter of beauty“ a female voice says.

The new fair will activate all emotions that are connected to the regional marble.

Marmotec had been founded in the 1980ies. With its last issue in 2016 it had seen 32 editions, the later in biennial rhythm.

Now Internazionale Marmi Macchine (IMM) is obviously trying to give the fair a renaissance by pointing out simply „Carrara“ as brand. No question: the small city between the quarry-mountains and the sea is the worldwide symbol for the noble marble. 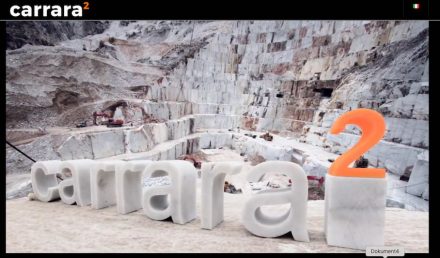 The new event has as name „Carrara2“. The meaning is clear: the new fair will create an added value by comprising a „Marmotec_Hub_4.0“ and a „White Carrara Downtown“.

The Marmotec-part will show machinery innovations and new ideas for stone for which the region stands. The location continues to be the fairground in Marina di Carrara.

The Downtown-part is a cultural event bringing together stone art and design objects within the ambiance of the historic city with its small streets and open-air-restaurants.

Something new is also to be reported from the buyers-program: it is no more free, as said on the webpage! „The package for stone buyers comprise B2B-metings and an auction of blocks and slabs“ – participants will have to pay 500 €.