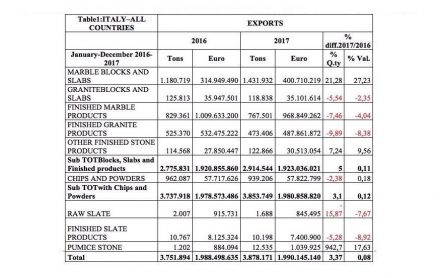 A precipitous drop in exports of finished products was recorded for Italy in 2017 relative to the previous year. Moreover, the major target client country USA saw negative growth of its own.

The mean value/ton was notable.

And finally: exports of raw blocks and slabs particularly destined for China increased sharply. So much so, in fact, that the increased made up for losses in exports.

These are annual figures originating from the research department of Internazionale Marmi e Macchine Carrara (IMM Carrara) for 2017. At the Carrara² Trade Fair (June 4th to 8th, 2018) press release, IMM Chairman Fabio Felice made a point of mentioning the „Marmotec_Hub_4.0“ and „White Carrara Downtown“ events, which were called to life to propagate the „Made in Italy“ and „Italian Excellence“ marks of distinction for value added products.

Time will tell if the market plunge is merely a small window in the general export picture or whether Italy is feeling the brunt of Turkey’s strong efforts in exportation. Brazil, too, is fighting to get the proverbial foot in the door e.g. of hotel construction projects.

The press-release with further details in Italian can be downloaded from IMM Carrara’s webpage.