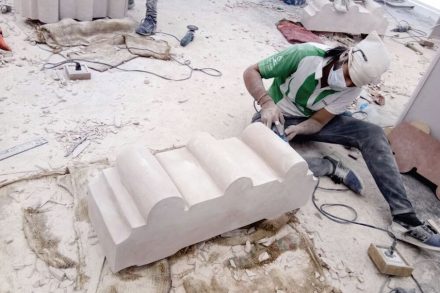 „Kaushal Bharat, Kushal Bharat“, roughly translated „Skill India, Skilled India“, is part of India’s effort to found and nurture a new class of skilled, certified workers among the 1.34 billion population. The program was brought to life as a measure to advance trade, e.g.: „Made in India“ (to attract investors), „Digital India“ (software and hardware), or „Smart Cities“ (cities of the future).

Some 15 billion Indian-rupee (₹) were earmarked for the qualification effort, or 224 million US-$ (192 million €). 2.4 million aspiring young citizens will benefit from the measure. 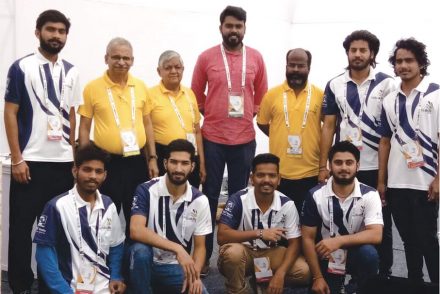 Stonemasons are included in the training effort, as India is one of the leading producers of sandstone and granite worldwide. May 2018 marked the beginning of the elimination contest for 7 young stonemasons in Rajastan’s city of Jaipur, center of sandstone production. The contestants came from different provinces in Western India. Their mission: finish a piece in a set timeframe just like in the WorldSkills competition – Olympic games of professional skills. 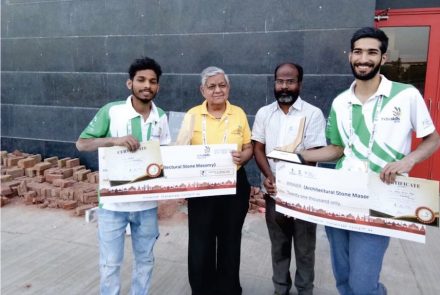 Indeed, this was a cold run for the upcoming competition: „This initiative will help … to identify the best talent who could represent India at the WorldSkills in 2019 in Kazan, Russia“, as Vikram Rastogi writes. He heads the Stone Technology Center in Jaipur and is the master-mind behind the competition’s tasks.

Because India is such a large country, the elimination for determining the WorldSkills competitors involves several phases, the first of which begins on the district level, then moving on to the provincial level and entire regions, and culminating with the nationally chosen competitor.

Jaipur’s tasks involved working convex, concave and spherical shapes out of blocks measuring 86 cm x 26 cm x 28,5 cm in 12 hours spread over 2 days. Before that they had 1 hour to grasp the job and, if needed, ask questions. Finally, contestants had half an hour to clean the pieces. All contestants were born after January 1st, 1997, making them 21 years of age at the most.

Contestants were invited to bring their own tools. The National Skills Development Council took care of travel and accommodation as well as food. A jury assessed the outcome. 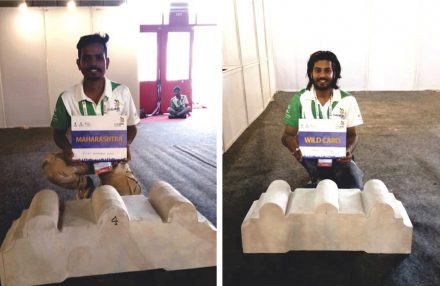 Prior to the start of the program, qualities of particular interest for the economy were identified. „Focus … would be on improved curricula, better pedagogy and better trained instructors“, as the government determined.

Participants in the courses are asked to assess the quality of the courses. A „grievance redressal system” is implemented.

A program promoting young start-up enterprises has also been put into place.

Stone-Ideas.com has put Vikram Rastogi in touch with the European participants in the WorldSkills program, making past task known and available for practice purposes to realistically assess the level of skills required.