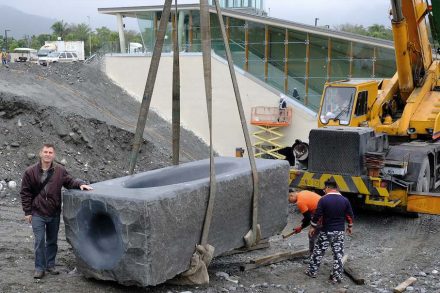 Natural stone plays a major role in Taiwan: The island has abundant reserves in marble and other types of stone and has developed a strong stone trade and production branch. Stone is omnipresent in the Taiwanese culture.

This is due to the special geological structure: Taiwan is where the Eurasian and Philippine tectonic plates clash at a speed of 80 mm/year. The rift lies under the Huatong Valley running north to south across the island.

„Taiwan is geologically young and is changing rapidly“, according to geologists.
German sculptor Tobel was resident from October 2017 to February 2018 to complete five projects. He made his own experience with natural forces emanating from within the stone.

Tobel highly active Agent Chang Yufen, had found interested parties, private and commercial, in the market to purchase his sculptures. The sculptures were to weigh from 50kg to 18t and be carved from local stone. 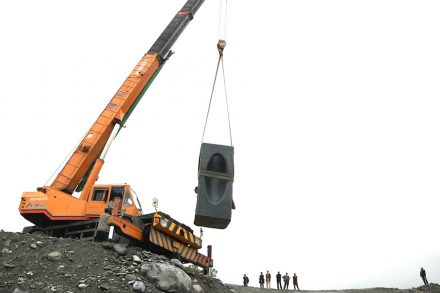 Tobel arrived, chose the material for his sculptures and rented space together with his son, who assisted him in his work, and later 4 more assistants, in the atelier of artists he knew. To summarize the process of completing the solicited works he writes: „At the end of 3 months’ work, numerous broken core drill bits, 5 large and 4 small seized angle grinders, 22 large and 38 small dulled diamond saw blades, one pneumatic hammers and 4 ruined iron chisels as well as many hours of aching muscles, bruises, scratches, wrenched backs and stone chips in.“ 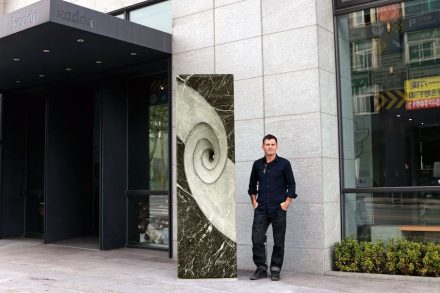 … at the end of which the sculptures were finally completed. They are now on view in a gallery, a private park, in front of a hotel, and the larges piece in front of a train station, respectively.

Note that Taiwan has strict stipulations for sculptures set up in public places. Typhoons often dump masses of water and earthquakes make the ground tremble several times a week. 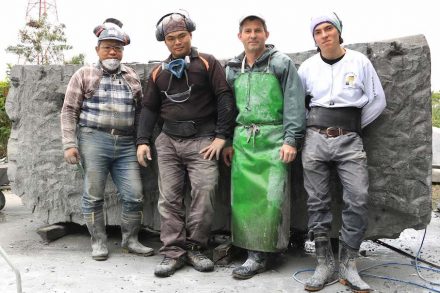 February 6th, 2018 send spasms of 6.4 on the Richter scale north of Huatong Valley in a depth of 17 km. The New York Times reported 4 fatalities and 145 missing as a result. The figures were corrected upward in the following days. The picture of a home on a slant and nearly tipped went around the world. 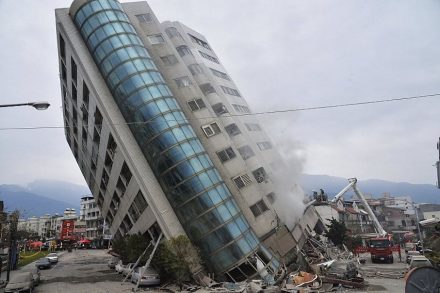 It was in just this building that Tobel had been staying mere hours earlier before he took a plane and left the country.

In the Taroko National Park, scientists from the GFZ German Research Centre in Geosciences (GeoForschungsZentrum) in Potsdam are researching how the interaction of geology, weather and biolgy sculpt a landscape. Taiwan is an exemplar to understand those features: it has steep slopes where abrasion is very strong, it has extreme rain like Morakot taifun in 2009 that dumped almost 300 liter of water per sqm within a few days, and also the database of the island is good due to decades with scientific projects.

Latest news: Just these days, Tobel was honored with the Grande Award of the Biennal del Chaco in Resistencia, Argentinien. He had already received the prize in 2010.