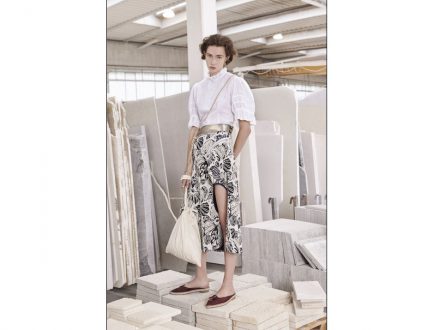 Quarries are popular venues for fashion companies and music recitals. We described some examples. Sculptor’s ateliers are also popular for spectacular productions. But we were surprised to see that the Laura Aparicio Label chose Grassi Pietre Company’s production site as the venue for the photo shooting of its latest creations.

Factories and production sites offer little in the way of spectacular scenery unlike the quarry or the atelier: random slabs and bundles with raw edges of the blocks from which they were cut, and stacks of tiles determine the optical impression.

In the midst of the stone, screaming saws, sprinklers above all a thin coat of stone powder. 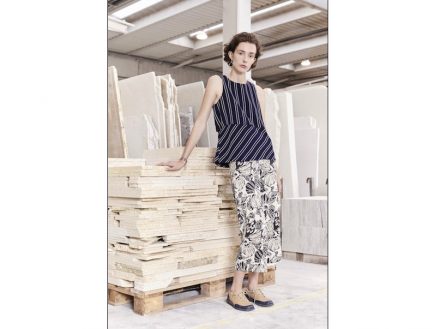 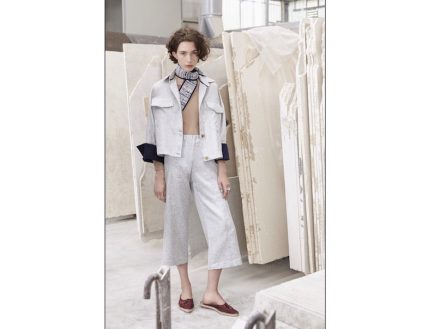 So, what moved the art director, the stylists and the photographers of Laura Aparicio to choose this venue above all others after having toured Grassi Pietre’s entire production site including the quarries?

Mariavittoria Grassi, who runs the company in tandem with her brother Francesco, sees nothing unusual about shooting in such „unusual places“: „More and more often architecture, design and fashion stimulate one another.” 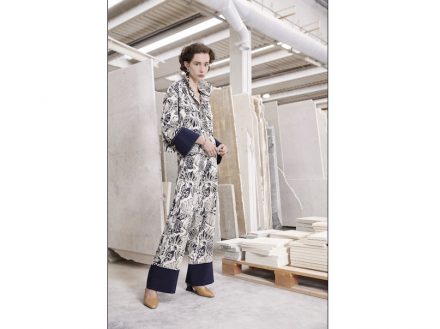 Her guess is that the „contrast of the stone hardness and imperturbability and the softness of clothes and fabrics” where alluring to the art director.

The shooting was carried out on a bank holiday when the factory was closed.

The stone in the backdrop is Pietra di Vicenza Lime Stone. Grassi Pietre has been manufacturing since 1850 and maintains its headquarters in Nanto in the Province of Vicenza near Venice. Two subsidiaries for design belong to the company, Laboratorio del Marmo and Artenadesign. 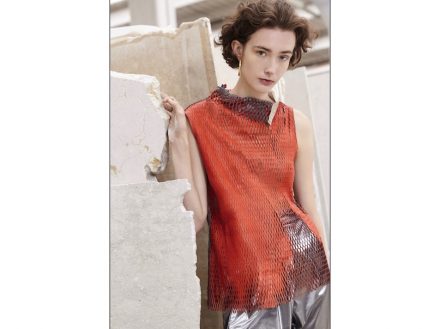