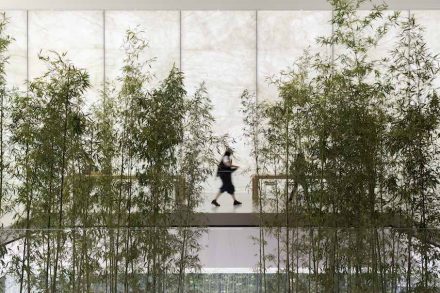 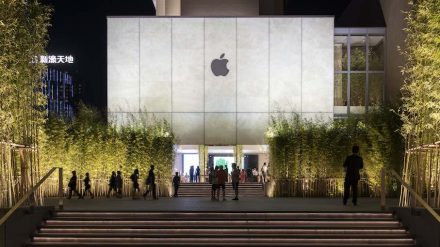 The aim was to create an „inviting, contemplative space“ setting it apart from the hustle and bustle of Macau’s gamers’ paradise, as Norman Foster + Partners expounds, referring to their new Apple Store in Macau’s central district of Cotai. The determining mission is also a political statement: The city belongs to its people, not merely to business interests, according to the guiding principle of the renowned architectural firm.

This was probably no hurdle for Apple’s designer team. Apple, the California-based computer producer, has already engaged the services of the British architectural prodigy in designing their stores in other locations.

The concept again, worded in another manner: calm, contemplation, and serenity are meant to lure visitors inside and allow potential customers to give in to their desires. 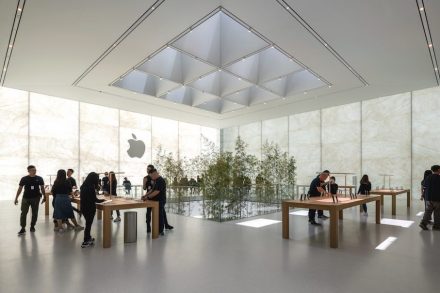 The building itself is a simple two-story cube. The façade is special: the second story is clad in ultra-thin natural stone sandwiched and imbedded in glass. The construction is translucent conjuring an impression of a Chinese lantern.

There is a story told about the invention of these paper lanterns, be it true or not: Chinese troops were trapped and urgently needed help from their allies outside. So they built tiny lanterns of thin bamboo and paper, put candles in them and let them go up. 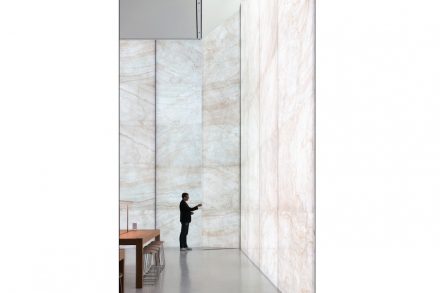 From inside the impression is one of a Cathedral with light streaming in through stained-glass windows. The architects have used this effect several times before.

What with its sustained luminescence the building automatically sets itself apart from the flashing business of surrounding casinos and theaters in Macau, all of which use strobes, flashing and running LED light fronts.

Foster + Partners‘ Stefan Behling describes the concept: „We wanted to create something very simple and pure – a beautiful and elegant building that complements the sounds, sights and colors of Macau, while embodying a sense of clarity and quietude.“ This was achieved mainly by „innovative use of natural materials“. 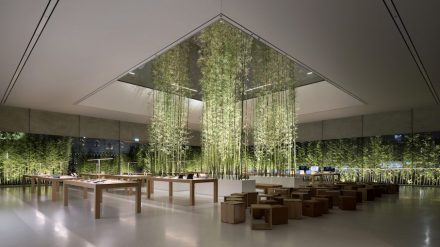 Plants are part of the big picture, precisely bamboo as is typical for China’s subtropical south coast. The plaza in front of the entrance bears a grove of bamboo guiding visitors into the building. 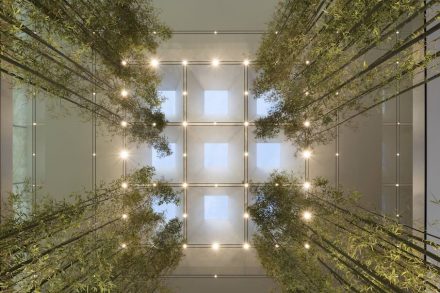 In the atrium inside, bamboo reaches beyond the first story – a fascinating effect: from below the impression is one of a green waterfall. 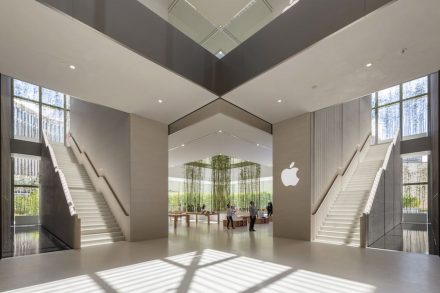 Natural stone is also represented in thicker forms, as is usual in Apple Stores, e.g. as wall cladding or in the stairwells. 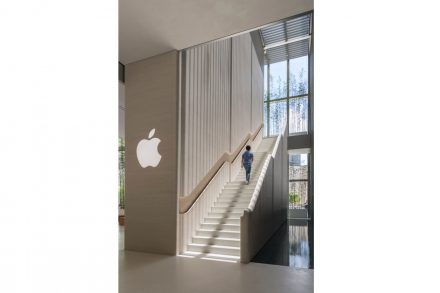