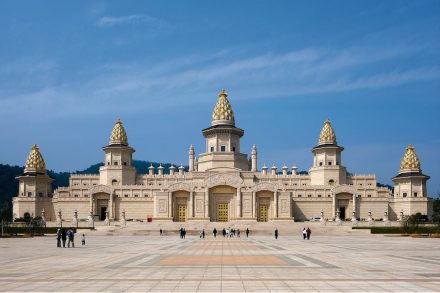 Religious building complexes are among the favorite show-and-tell examples for the stone branch. Here, there is room not only for sheer endless stone surfaces, but also for the whole gamut of what marble, granite and other types of stone have to offer. The latest example was the Sheik Zayed Mosque in Abu Dhabi completed in cooperation with companies from many countries in the West. We had reported.

Here now is a project in China comparable in its dimensions. It is the Linghsan Brahma Palace in Wuxi at the foot of the Lingshan mountain range in the Province of Jiangsu, Shanghai’s backland.

It is a gargantuan stone complex with extraordinary implementation of stone – not only in mass but also in terms of craftsmanship. It was completed in 2008 and will be celebrating its 10th jubilee this year.

The site incorporates meditation and worship and offers room for art exhibits. It is a first-class tourist attraction and drew some 3 million visitors each year since opening. It is also the site of the World Buddhist Forum.

The building costs amounted to 2.6 billion Yuan, or some 380 million US-$ at the time. 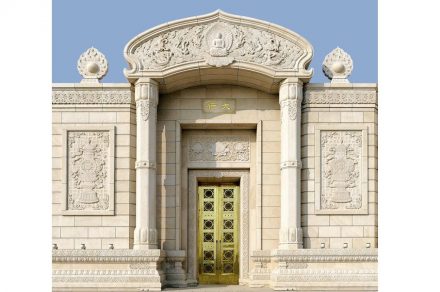 The palace has 3 stories and 5 towers of various sizes. At a distance the sheer size is overpowering. Close up, the multitude of ornaments on the façade leaves visitors in awe. 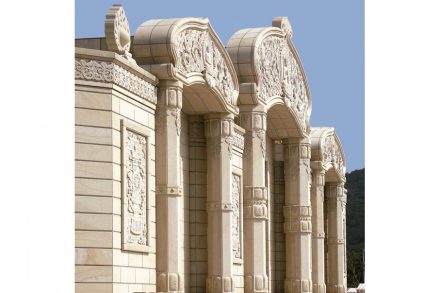 The façade was built by Dinglistone Company using G682 granite. The company specializes in large projects with high artistic value. For the façade and the entrance alone, some 100.000 m² stonemasonry had to be completed.

„All worked by hand“, says Andrew von Dinglistone, „there was simply too much detail in the design for implementation of machinery.“ Arranging the many Buddhist ornaments was developed by the company chief and conferred with the principal. 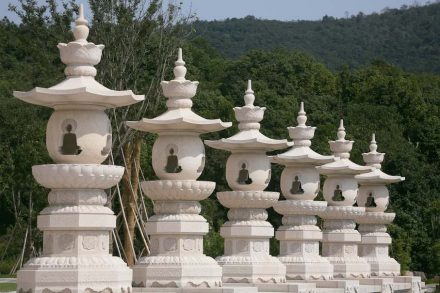 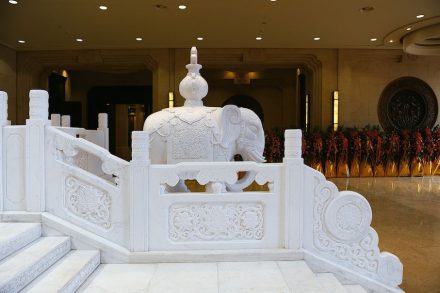 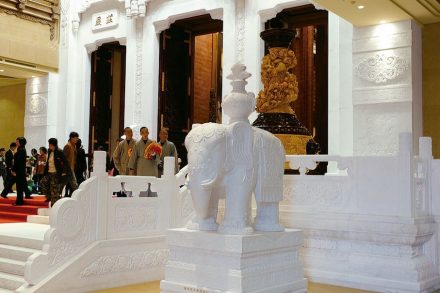 Called the „Buddhist Wonderland“ or „Louvre of the East“, the interior is no less spectacular. Visitors comment that the three great halls (Aisle Hall, Tower Hall, Altar Hall) are so full of detail that one comes out with a stiff neck and still, one would have seen only a small portion of all there is to see.

Stone work on the interior was realized by UMGG Company. Aside from the tile work on the polished white marble flooring, much detail work of high artistic value was at hand, e.g.: wall cladding, medallions on the floor and the pillars. 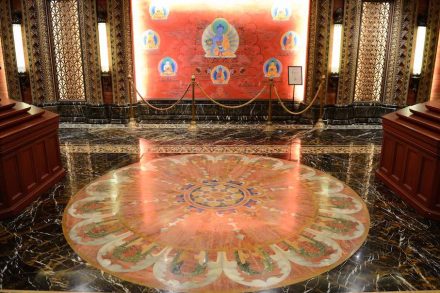 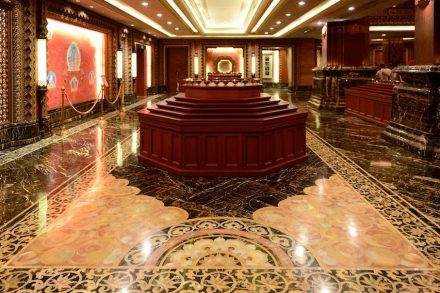 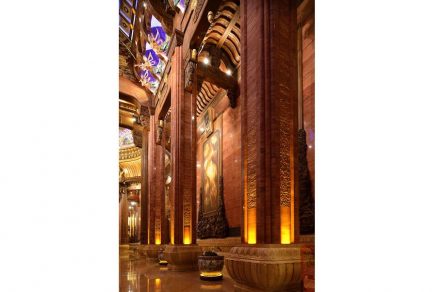 We show a small portion of the work. Stone implemented was Giallo Royal Tafu, Lotus Beige, Energetic Red and King Gold Marble mostly with polished surfaces according to Sheng Zhe, member of staff.

The complex was granted the Luban Award, the most prestigious prize for architecture and construction engineering in China.

Building the complex in the city of Wuxi has a great deal to do with the role of the Lingshan Mountain range in Buddhism. The palace was built next to the Lingshan Scenic Area and one of the world’s largest Buddha Statues (88 m high, made with 700 t of bronze), the Five Mudra Mandala, the Nine Dragons Bathing Sakyamuni and the Xiangfu Temple to name but some of the attractions. The entire site is somewhat reminiscent of a theme park.

Dinglistone is based in Chongwu, Jujian Province. The city is considered the center of China’s natural stone sculpting branch. The company has worked on a number of projects in the Western World, e.g. in the USA, Spain and France.

UMGG is a world player in China’s stone branch. It has developed more than 1800 projects worldwide in 30 years. Next to a number of sites in Guandong Province it maintains its headquarters in Dongguan. 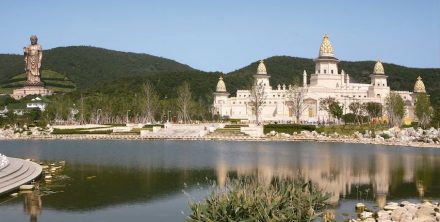